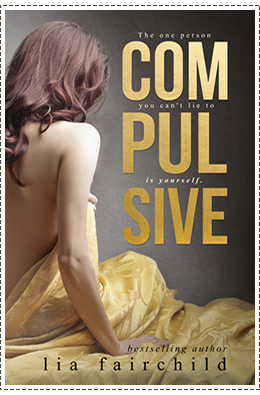 But some lies protect...and heal. At least that's what Gray Donovan had hoped for. She's a compulsive liar using it as a defense mechanism to survive life and her shattered past.

When she starts seeing therapist Daniel Harrison, she can no longer deny the truths that have haunted her for so many years. She must now stand and face the,.

Opening up to Daniel leaves her exposed and vulnerable. When her soul is bared to him, she can't contain the attraction or the feelings he elicits.

Daniel feels drawn to his new patient, but knows he will have to fight it in order to resurrect Gray from her demons. His will and his judgement are tested when he must overcome his own doubts and face his own secrets.
**Content Warning: Due to language and sexual situations, this book is intended for 18+ only**

"I want to know that when I speak, my words are genuine...and from my heart."

I haven't read many "forbidden love"-esque novels but the moment I read the blurb for Compuslive, I was intrigued! This was the first time that I've come across a romance between a therapist and their patient, so a big check mark for being unique. The story was touching and I really liked how the relationship between the heroine and hero developed. It didn't feel forced or rushed even if it did play out in a span of a few days. And although the blurb hints at Daniel's secrets, they weren't really touched on. This book was very much focused on Gray and her growth.

Gray Donovan is a compulsive liar and has been seeing Dr. Wallace as a means to keep her job. When Dr. Wallace has to relocate, Gray is faced with having to pick a new therapist. She didn't take her sessions seriously to begin with, so the prospect of choosing a new shrink didn't appeal to her at all. Until she met Dr. Daniel Harrison, that is. Gray's character growth was by far my favorite pat of the book. Right from the start, I liked Gray. She was quite spirited and amusing. There were some flashback chapters interspersed throughout the novel that really helped in understanding her. I loved her interactions with Alyssa and how they really highlighted how caring and maternal she could be.

"Some people want things even if they're not good for them."

Gray was adamant in having Daniel as her therapist even when he wasn't taking in any new patients. I liked that his greatest appeal to Gray was how he could make her feel calm and relaxed. Comfortable enough to want to seek his professional help. I was enamored with Daniel. He was accommodating and compassionate. Gray was a tough cookie but as the story progresses you really see her vulnerability surface. I loved that Daniel helped her come to terms with her past and move forward. Circumstances arise that has them seeing each other outside the office as well. Had they only known each other and met within a professional setting, I probably wouldn't have found their relationship growth very realistic.

"We're all human. We all love and hurt and rise and fall."

Overall, Compulsive was beautifully written and packed with great characters (both main and secondary)! I mistakenly thought that this was a standalone though so now I'm suffering the wait. With how this one ended, I believe the next book will delve more into Daniel's past *grabby hands* I need it!

Alyssa
What a firework this teenager was.
She is Gray's neighbor and basically, her best friend.
I loved how Alyssa was mature but not enough for you to forget how young she was.
She definitely has a heart of gold and I hope there'll be more of her in book two!