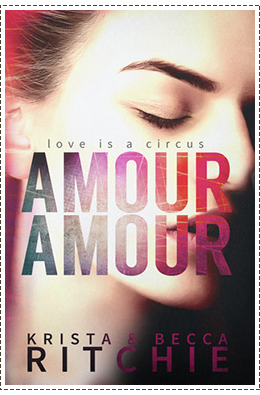 Love is a circus

"Every day," he says lowly, "I hold a person's life in my hands. The circus is based one-hundred percent off trust. I give it all to someone, and they give it all to me."

The best aerial technique won't land 21-year-old Thora James her dream role in Amour—a sexy new acrobatic show on the Vegas strip. Thora knows she's out of her element the second she meets Amour's leading performer. Confident, charming and devilishly captivating, 26-year-old Nikolai Kotova lives up to his nickname as the "God of Russia".

When Thora unknowingly walks into the crosshairs of Nikolai's after-show, her audition process begins way too soon. Unprofessional. That's what Nik calls their "non-existent" relationship. It's not like Thora can avoid him. For one, they may be partners in the future—acrobatic partners, that is. But getting closer to Nik means diving deeper into sin city and into his dizzying world.

Thora wants to perform with him, but when someone like Nikolai attracts the spotlight wherever he goes—Thora fears that she's destined to be just background to his spellbinding show.

This sexy and exhilarating New Adult Romance can be best be described as Cirque du Soleil meets the steamy, athletic romance of Center Stage.
*standalone & no love triangles--recommended for readers 18+ for mature content*

"Don't count your losses before you see the scoreboard."

I love Cirque du Soleil. So when Krista and Becca Ritchie announced that their next book would have an acrobatic circus setting, I was dancing on tables. Amour Amour was fun, unique and captivating. This spectacular writing duo can do no wrong in my book. They excel at writing family dynamics and the Kotovas stole the show in my opinion. My heart went all warm and fluttery whenever they were all together, especially that Thanksgiving scene *wipes tear*. If you haven't read the Addicted series yet (which I highly recommend that you do), Amour Amour would be a great book to read for a feel of their writing style. The Addicted series references in this book though, my goodness, made me a very happy camper. This was my first 'circus' themed book and it was incredibly entertaining!
Read more »
Posted by Jae at 9:43 PM 6 comments: 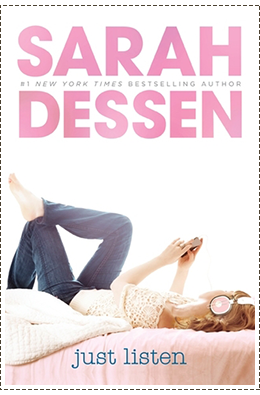 
To find the truth, you've got to be willing to hear it.

When she's modeling, Annabel is the picture of perfection.

But her real life is far from perfect.

And most of all, he's determined to make Annabel happy...

"But being nice wasn't as easy as it seemed, especially when the rest of the world could be so mean."

I LOVED THIS BOOK. Just, wow. Powerful, touching, down right emotional. There are two elements that I absolutely love in any book: an emphasis on family and character development. This book had those in spades. The story was beautifully written and, in my opinion, the flow was spot on.


The title, Just Listen, fits this story to a tee and is told in the pov of Annabel Greene, the youngest of three sisters. She lives in a modern styled home known as The Glass House, exposing them to their neighbors and passersby. From the outside, the Greene family seems perfect. Annabel was known for being in TV commercials and was dubbed as the girl who had it all. That was far from the truth. Her friendship with her best friends, Clarke and Sophie, had ended badly which left her isolated. Her sisters had moved out together and didn't call home much which left Annabel alone. She didn't have anyone to confide in so she bottled up her thoughts. When she was with her family, it was apparent how her parents would shield her from family problems and push her opinions aside because of her age. All Annabel ever did was do what she was told and listen.

I liked Annabel. I liked her loyalty to her family. I understood her decisions. She was being bullied at school but she didn't want to burden her family by telling them so. She wanted to stop modeling but she didn't want to hurt her mother's feelings. She was hiding a secret from everyone because she was scared. Just Listen was realistic. One of my favorite aspects of this book was the relationship between Kirsten and Whitney, Annabel's sisters. They had a fall-out ever since Whitney was forced to move back home. They hardly spoke to one another. Their character growth as individuals was poignant and I cried my eyes out when they made up. Not one to inject herself into situations, Annabel quietly observed her sisters from the side. The narrative was so descriptive and thought provoking, throughout the entire book really, and it made my heart ache (in a good way).

"Music is the great uniter. An incredible force.
Something that people who differ on everything and anything else can have in common."

Annabel's growth wasn't as awe-inspiring as her sisters but I still really enjoyed seeing her come out of her shell after meeting Owen. He was the broody, lonely guy at school who was always listening to music. Their friendship developed slowly but sweetly. Owen had a rule to always be honest and Annabel couldn't even fathom being so. His obsession with music was endearing. I loved that he tried to get her to be more open-minded about the different genres of music. I LOVED HIM. He was such a warmhearted guy and an incredibly wonderful brother. His interactions with his younger sister, Mallory, had me smiling wide. I loved that Annabel could be the "older sister" when it came to Mallory and you can see another side to her that's doesn't come out in her own home. The secondary characters made this book just as much as the main characters. And it's those kinds of stories that I find more believable and sucks you right in.

I gave Just Listen 5 stars for the story. It's very much a story of family and self-discovery in my opinion. The romance was subtle and sweet. I loved that it highlighted the importance of trust and communication, that you shouldn't be so quick to judge someone based on their appearance or demeanor. I highly recommend this book to all YA contemporary lovers. It was my first Sarah Dessen book and I must say, she hit this one out of the park. I cannot wait to read more of her work!

Rolly
Owen's best friend. Rolly was great comic relief and adorable.
I loved that you got to see his own romance bloom, I was cheering for him the entire time.

- - - Top Ten Tuesday is a weekly meme, hosted by The Broke and The Bookish, where a new topic is given for a top ten list - - -

I don't think I've ever stuck to a tbr list completely but here are some books that I really hope to start:
(Click covers for Goodreads link)

Now that I know Winter will be releasing this year, I need to get a move on with The Lunar Chronicles!
I finished Cinder the beginning of this year and adored it. I can't wait to start Scarlet
which based on the synopsis will parallel Red Riding Hood. :D

2. Seeds of Iniquity by J.A. Redmerski

I LOVE THIS SERIES. It's one of those books that make me question good vs. evil.
The other books in the series were thrilling and intense.
I was hoping book 4 would be more on Fredrik but this Nora character sounds kickass as well. 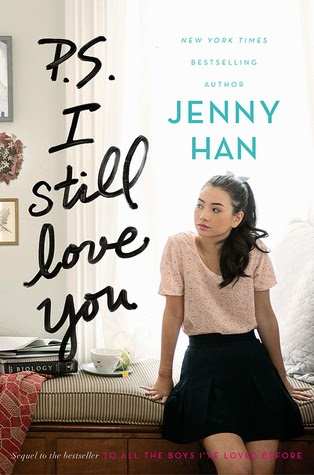 
Lara Jean didn't expect to really fall for Peter.
She and Peter were just pretending. Except suddenly they weren't. Now Lara Jean is more confused than ever.


When another boy from her past returns to her life, Lara Jean's feelings for him return too. Can a girl be in love with two boys at once?


In this charming and heartfelt sequel to the New York Times bestseller To All the Boys I've Loved Before, we see first love through the eyes of the unforgettable Lara Jean. Love is never easy, but maybe that's part of what makes it so amazing.


Okay, so I'll admit that I didn't read the synopsis for this book before adding it to my tbr. I read To All the Boys I've Loved Before and adored it. I wanted more. Especially with how the book ended and where Lara Jean and Peter's relationship stood. Now after reading the blurb, I'm getting nervous. Please, PLEASE don't break my heart. Team Peter K, all the way!!!
Posted by Jae at 12:01 AM 22 comments:

Cover Reveal: BEYOND THESE WALLS by J.L. Berg

J.L. Berg is the USA Today bestselling author of the Ready Series. She is a California native living in the beautiful state of historic Virginia. Married to her high school sweetheart, they have two beautiful girls that drive them batty on a daily basis. When she's not writing, you will find her with her nose stuck in a romance novel, in a yoga studio or devouring anything chocolate. J.L. Berg is represented by Jill Marsal of Marsal Lyon Literary Agency, LLC.

It's officially been about 6 months since I started this blog *dances* :D What I've noticed as a newbie is how difficult it is to stay active and post daily. I never had a plan. I pretty much winged everything the night before haha. But now I've read so many books, all of which I will review eventually, I have no clue where to start.

Labels: jae talk, miscellaneous, on repeat
Newer Posts Older Posts Home
Subscribe to: Posts (Atom)
“To build up a library is to create a life. It's never just a random collection of books.”
―
Carlos María Domínguez