Review: UPSIDE DOWN by Lia Riley 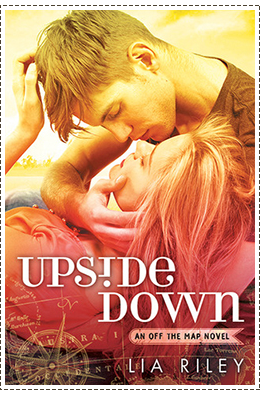 Twenty-one-year-old Natalia Stolfi is saying good-bye to the past-and turning her life upside down with a trip to the land down under. For the next six months, she'll act like a carefree exchange student, not a girl sinking under the weight of painful memories. Everything is going according to plan until she meets a brooding surfer with hypnotic green eyes and the troubling ability to see straight through her act.

Bran Lockhart is having the worst year on record. After the girl of his dreams turned into a nightmare, he moved back home to Melbourne to piece his life together. Yet no amount of disappointment could blind him to the pretty California girl who gets past all his defenses. He's never wanted anyone the way he wants Talia. But when Bran gets a stark reminder of why he stopped believing in love, he and Talia must decide if what they have is once in a lifetime . . . or if they were meant to live a world apart.

"Leaving is the only way to move forward. If I never get lost, I'll never be found."

Witty and heart-warming. Talia and Bran pulled at my heart strings. From the moment they met, I had an inkling that they'd have me grinning and giggling (which they did). It was instant chemistry between the two. I really enjoyed how their relationship grew. But there were many times where I wanted to shake either characters, I must admit. Both Talia and Bran are flawed, but it's how they owned up to their mistakes that made me root for them even harder.
Read more »
Posted by Jae at 12:00 AM 4 comments:

IT'S MY BIRTHDAY AHHHHHHHH.

The year flew by so quickly. I swear I was singing Taylor Swift's '22' a few months ago.
Now, I'm a year older wiser :')

Unfortunately most of my family is busy this week, not to mention I work this afternoon, so I won't be celebrating with them until the weekend. [I miss my precious niece so much, you guys]. BUT ALL IS NOT LOST. I have a dinner and movie date with my friends tonight! Thank goodness for them because I would have just stayed home with Tidus otherwise (not that Tidus is no fun haa).

In celebration of today and in thanks for following the blog, chatting with me on twitter or just stopping by, I'm having a birthday giveaway! I've included some of my favorite bookish goodies, some of which I received from my monthly book subscription box I wanted to share, and a signed copy of one of my fave books read this year, To All the Boys I've Loved Before by Jenny Han! Be sure to enter at the bottom of the post :)

And to end the post, since it's my 23rd birthday, here's 23 random facts about myself. Some of these will probably be familiar if you've seen my 20 random facts tweet haa x)

I didn't even realize it was the 10th anniversary of Twilight until I came across the new edition at the bookstore. There was a big display with multiple copies. The iconic hands holding an apple drawing my attention. I thought Stephanie Meyer finally reconsidered and released Midnight Sun. I was close to happy tears. But 'Twilight Reimagined'? I'll admit, I was very intrigued at the concept but not enough to actually read it. I'd like to make it clear though that I LOVE TWILIGHT. I even purchased a Vietnamese edition when I spent a summer in Vietnam. New Moon had me crying so hard. Eclipse had me gushing. The final book was meh for me but I won't get into the reasons why heheh.

I first read Twilight in 2006. At that time I was more into fantasy books like Inkheart and Silverwing but my friend insisted I read it for Edward Cullen. Please note that I had never read a contemporary/paranormal romance book before this. There was a lot of giggling and blushing when kisses were mentioned (I was a very innocent child ;) ). Edward Cullen was my first book boyfriend!  He was a gentleman and attentive. He was the perfect guy in my eyes and I was Team Edward for the longest time until I watched the movies. I'm sorry but Robert Pattinson just wasn't how I imagined Edward. I was Team Jacob when it came to the movies. I mean, Taylor Lautner woooo *fans self* [But really I was all about the cute and sexy half-naked werewolves hahah].

Anyway, back to the main point of my post, I won't be reading Life and Death. The main reason being that my tastes in books have changed drastically since then. I prefer Adult and NA contemporary romance now. I prefer heroines that have backbone and won't easily be manipulated by a handsome face. I also prefer books without love triangles (most of the time). It's been ages since I reread the Twilight saga, and I don't see a reread in my future. Nonetheless these books hold a very dear place in my heart and always will. It was the series that got me into reading romance novels after all!

Have you read Life and Death? Why or why not? To those who have read it, I am definitely interested to know what you thought and what the new character names are!

Hii, loves. Sorry, I've been MIA these past few months but I just haven't had the mojo to blog with babysitting my niece, finding time to read, being a tv show junkie and starting a new job. I do hope to resurrect the blog at the end of the month though *fingers crossed*.

For today, I'm very excited to share with you the cover of DIRTY by Kylie Scott! She has a way of perfectly blending humor and sexiness into a fun and enjoyable story. Jimmy Ferris is still my #1 rock star hottie but when I met Vaughan (the hero of her upcoming book), I definitely wanted more of him! 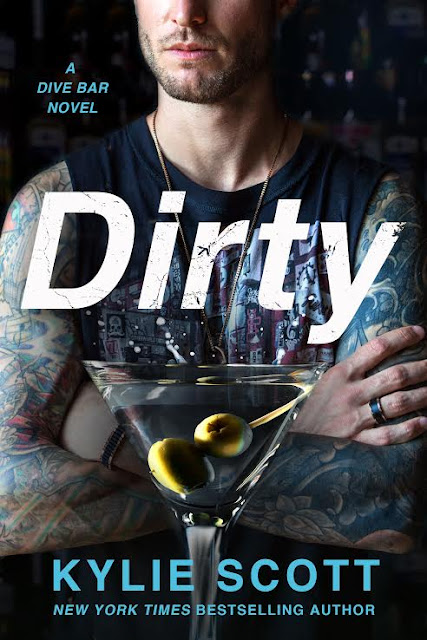 The last thing Vaughan Hewson expects to find when he returns to his childhood home is a broken hearted bride in his shower, let alone the drama and chaos that comes with her

Lydia Green doesn't know whether to burn down the church or sit and cry in a corner. Discovering the love of your life is having an affair on your wedding day is bad enough. Finding out it's with his best man is another thing all together. She narrowly escapes tying the knot and meets Vaughan only hours later.

Vaughan is the exact opposite of the picture perfect, respected businessman she thought she'd marry. This former musician-turned-bartender is rough around the edges and unsettled. But she already tried Mr. Right and discovered he's all wrong—maybe it's time to give Mr. Right Now a chance.

After all, what's wrong with getting dirty?

Kylie is represented by Amy Tannenbaum at the Jane Rotrosen Agency, New York. 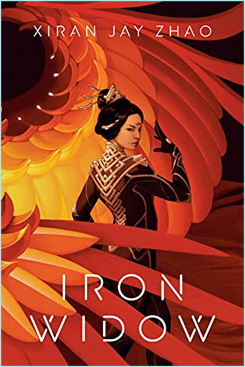