Review: THE WOMAN IN CABIN 10 by Ruth Ware 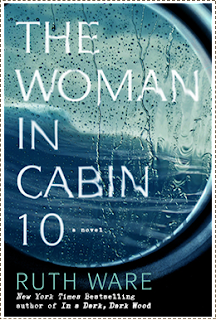 Title: The Woman in Cabin 10

Lo Blacklock, a journalist who writes for a travel magazine, has just been given the assignment of a lifetime: a week on a luxury cruise with only a handful of cabins. The sky is clear, the waters calm, and the veneered, select guests jovial as the exclusive cruise ship, the Aurora, begins her voyage in the picturesque North Sea. At first, Lo's stay is nothing but pleasant: the cabins are plush, the dinner parties are sparking, and the guests are elegant. But as the week wears on, frigid winds whip the deck, gray skies fall, and Lo witnesses what she can only describe as a dark and terrifying nightmare: a woman being thrown overboard. The problem? All passengers remain accounted for and so, the ship sails on as if nothing has happened, despite Lo's desperate attempts to convey that something (or someone) has gone terribly, terribly wrong.

"There's a reason why we keep thoughts inside our heads
for the most part—they're not safe to be let out in public."

This book triggered all my wannabe Detective Conan skills! Just ask my cousin who I religiously kept updated on my reactions and critical deductions (whether or not she was a willing participant of these impromptu book club messages is unknown). Some of my guesses were not too far off from the truth either. When the book first released, the hype was all over my social media and had caught my interest as a new fan of thriller novels. I was curious if I would like the story because, I was more interested in procedural crime type mysteries/thrillers at the time. It was fun getting my brain working and trying to figure out the what happened though. Hopefully there will be a book-to-movie adaptation of The Woman in Cabin 10, I would watch it!
Read more »
Posted by Jae at 8:00 AM No comments:

- - - Top Ten Tuesday is a weekly meme, created at The Broke and The Bookish but now hosted by Jana at That Artsy Reader Girl, where a new topic is given for a top ten book-related list - - -


This week's prompt is 'Favorite Bookmarks' and oh what a struggle it was to pick my top ten! I haven't been reading much lately but no fear, my bookmarks are still being used well~ They make textbook reading a little more bearable heh.