Dual Review: THE STAR-TOUCHED QUEEN + A CROWN OF WISHES

I am so far behind the Roshani Chokshi bandwagon but I am determined to catch up. I picked up book one back in 2016 when it first streaked across my book socials. Then being the collector that I am, of course I picked up book two despite having not read the first book yet. I mean, would you LOOK at these covers? Gorgeous! Stunning! *insert other synonyms of Beautiful* I had a terrible habit of getting books of a series without knowing whether I would like it or not. I have since then (6 hard years later) gained better control. In the case of The Star-Touched Queen duology, what you see is exactly what you get! Magic in words and imagery. I was swept away by the poetic narrative and mystical setting from the first few chapters. Author: Roshani Chokshi
The Star-Touched Queen #1
Publication Date: April 26, 2016
| +Goodreads | Amazon | Barnes&Noble | Kobo | iBooks |
Fate and fortune. Power and passion. What does it take to be the queen of the kingdom when you're only seventeen?
Maya is cursed. With a horoscope that promises a marriage of death and destruction, she has earned only the scorn and fear of her father's kingdom. Content to follow more scholarly pursuits, her whole world is torn apart when her father, the Raja, arranges a wedding of political convenience to quell outside rebellions. Soon Maya becomes queen of Akaran and wife of Amar. Neither roles are what she expected: As Akaran's queen, she finds her voice and power. As Amar's wife, she finds something else entirely: Compassion. Protection. Desire...
But Akaran has its own secrets—thousands of locked doors, gardens of glass, and a tree that bears memories instead of fruit. Soon, Maya suspects her life is in danger. Yet who, besides her husband, can she trust? With the fate of the human and Otherworldly realms hanging in the balance, Maya must unravel an ancient mystery that spans reincarnated lives to save those she loves the most...including herself.

"My star-touched queen... I would break the world to give you what you want."

Maya is cursed. As such, she's been fortunate to have not been married off by her father, the Raja of Bharata, until now. She ends up marrying Amar of Akaran through a turn of events and I must admit their first meet had me grinning from their chemistry. Nothing I love more than a strong-willed female lead ready to take out the intelligent yet mysterious male lead if necessary. Maya is distrustful of others, having been isolated within the palace all her life. Her only friend was her younger half-sister, Gauri. I'll be honest that I teared up some at their good-bye. I love sisterly-love ;___;
I knew from the get-go something was up with Amar. He was this elusive being that I just couldn't understand but damn, did his words make me swoon. It must be his manner of speech because he gave off that undeniable "I've seen things; I am wise" aura... which turned out to be true! I absolutely loved Maya in this book but my skeptical self could not accept Amar and his secrets. I gave him the benefit of the doubt because if nerdy Gupta was that loyal to Amar, he must have some good points. In any case, Maya's character growth and "journey" was the highlight for me.
As I had mentioned in the introduction, the imagery in The Star-Touched Queen was beautiful. I got the feeling of being spirited away. I greatly enjoyed the descriptions, the world-building. I rooted for Maya as Amar continued to push her into her new role as Queen. I felt her hesitation to accept such power and responsibility over people, but she was determined to learn to. I didn't get completely immersed into the story until about 50% when a character from Maya's past appeared. The. Drama. THE HURT. Enter Kamala who I honestly found was the most fascinating entity in the book. It's a big yes from me for mystical creatures! Her dynamic with Maya was very enjoyable.
Okay, 'tis time to wrap this up because I'm starting to feel like I'm just spewing words now. The Star-Touched Queen was a great read! I went through about 80% of the novel with more questions then answers. The plot twist or climax was well-timed. I was tortured by the mystery of Amar and struggled with whether to trust him or not as Maya had. I enjoyed the unraveling of history and my heart ached as Maya forged on to right wrongs. I laughed. I teared up. I gasped. I dove right into Roshani Chokshi's world with no expectations and came out a fan.
-  -  -  -  -  -  -  -  -  -  -  -  -  -  -  -  -  -  - 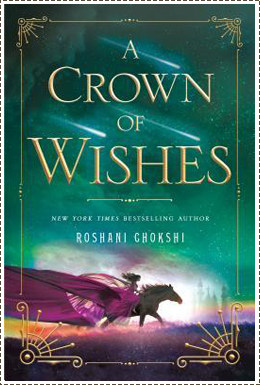 Title: A Crown of Wishes

Author: Roshani Chokshi
The Star-Touched Queen #2
Publication Date: March 28, 2017
| +Goodreads | Amazon | Barnes&Noble | Kobo | iBooks |
And ancient mystery. An unlikely union. For one young princess in a state of peril, a dangerous wish could be the only answer...
She is the princess of Bharata—captured by her kingdom's enemies, a prisoner of war. Now that she faces a future of exile and scorn, Gauri has nothing left to lose. But should she trust Vikram, the notoriously cunning prince of a neighboring land? He promises her freedom in exchange for her battle prowess. Together they can team up and win the Tournament of Wishes, a competition held in a mythical city where the Lord of Wealth promises a wish to the victor. It seems like a foolproof plan—until Gauri and Vikram arrive at the tournament and find that danger takes on new shapes: poisonous courtesans, mischievous story birds, a feast of fears, and twisted fairy revels. New trials will test their devotion, strength, and wits. But what Gauri and Vikram will soon discover that there's nothing more dangerous than what they most desire.

"How do they celebrate good fortune in Bharata? In Ujijain, we kiss."
I want to climb the tallest mountain and shout to the world my love of this book!! Holy moly. Ok, I enjoyed book one but I felt there was something missing. A Crown of Wishes met my expectations and beyond. Gauri and Vikram were amazing and admirable characters as individuals. Then when they teamed up, they were absolutely dynamite! Oh goodness, how their dynamic made me grin and giggle. There was definitely a sunshine x grump trope at work. I loved how Vikram continued to get on Gauri's nerve. Pretty sure Vikram had a "smoulder" that was naturally on at 100% every.damn.time. I fell so hard for this cunning prince.
Gauri is "The Jewel of Bharata" that possesses the people's affection and loyalty. She's worked hard to protect her kingdom knowing that the current emperor, her brother Skanda, only cares for himself. After her plans to take the throne falls through, she is forcibly exiled and ends up in Vikram's territory of Ujijian. Vikram was introduced to us in The Star-Touched Queen and I loved how we've come to read his story. Unlike Gauri, Vikram is already set to take the throne after his father, except not in the manner that he wishes. The council wants to use him like a puppet but Vikram wants to be acknowledged as a proper ruler where his voice holds power and authority. Enter the magical Tournament of Wishes.
The narrative is yet again beautifully written. The story is lyrical and entrancing. I loved the use of descriptive imagery. I could easily visualize the magic and the shadows of the world. As I'm reading about the tournament and the tasks, I'm imagining how it would look on-screen. Can we PLEASE get a tv-series or movie adaptation, universe? It would be stunning! I felt like I was on an adventure with these two characters who've grown drastically from the children we first met in book one. Gauri and Vikram are leave lasting impressions. I'll likely be talking about them to my friends for a long while. Not only are the main characters memorable but so are the secondary ones. Aasha, in particular, pulled at my heart strings at her first introduction.
The relationship growth between Gauri and Vikram was sooo satisfying. They started off as enemies and became partners fighting on the same side. Their distrust of each other was swept aside for a common goal. I loved ALL their interactions. It was slow burn at its finest! Someone find me a man that remembers the little details and works at making my daydreams a reality. The last chapter made my heart soar :') To wrap up this review rambling, READ THIS BOOK.
Posted by Jae at 10:00 AM