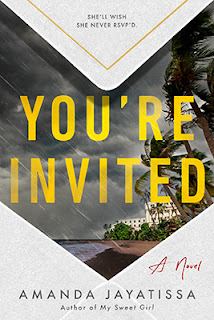 You're Invited
by Amanda Jayatissa
Release Date: August 9, 2022
| +Goodreads |
Standalone
Genre: Thriller, Mystery
- - -
When Amaya is invited to Kaavi's over-the-top wedding in Sri Lanka, she is surprised and a little hurt to hear from her former best friend after so many years of radio silence. But when Amaya learns that the groom is her very own ex-boyfriend, she is consumed by a single thought: She must stop the wedding from happening, no matter the cost.
But as the weeklong wedding celebrations begin and rumors about Amaya's past begin to swirl, she can't help but feel like she also has a target on her back. When Kaavi goes missing and is presumed dead, all evidence points to Amaya.
However, nothing is as it seems as Jayatissa expertly unravels that each wedding guest has their own dark secret and agenda, and Amaya may not be the only one with a plan to keep the bride from getting her happily ever after...
- - -
Why? I've been expanding my mystery/thriller collection and trying to read new-to-me authors in the genre. This one popped out at me among the August releases because wedding season has been in full swing this summer for my family and friends. I really like how simple yet gloomy the cover is. I've been enjoying trying to figure out who the murderer is in these types of mystery books despite not getting it correct hah. 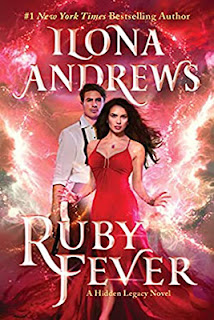 Ruby Fever
by Ilona Andrews
Release Date: August 23, 2022
| +Goodreads |
Hidden Legacy #6
Genre: Adult, Romance, Paranormal, Urban Fantasy
- - -
An escaped spider, the unexpected arrival of an Imperial Russian Prince, the senseless assassination of a powerful figure .a shocking attach on the supposedly invincible Warden of Texas, Catalina's boss... And it's only Monday.
Within hours, the fate of Houston—not to mention the House of Baylor—now rests on Catalina, who will have to harness her powers as never before. But even with her fellow Prime and fiancé Alessandro Sagredo by her side, she may not be able to expose who's responsible before all hell really breaks loose.
- - -

Why? I was first introduced to the Hidden Legacy books last year and speedily binged the earlier novels. SO. DARN. GOOD. I quickly fell in love with the Baylor family. Every single good character, I must protect! If you're looking for action, magic, hierarchies, family emphasis, romance with steam AND banter? Look no further. You must check out this series! I can't wait to read the finale of Catalina's trilogy~
What are you waiting on?
I'd love to stop by and see your pick(s), just leave a link in the comments :)