Blog Tour + Giveaway: HER MARINE NEXT DOOR by Aliyah Burke 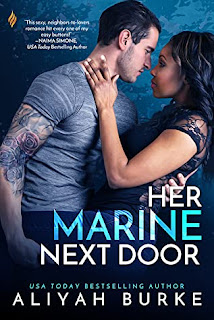 
My next door neighbor Parker Jax is not my type. He's covered in tats, rides a motorcycle, and his parties keep me up all night. The fact he's sexy as sin doesn't change the fact we are oil and water.

I'm a quiet artist. He's a rowdy marine. I've got a broken heart. I'm convinced he doesn't have a heart at all.

Thankfully, my bad-boy neighbor is on leave from Marines for only thirty days. But then the jerk has to go and show me that he has a soft side beneath all those hard muscles. He actually leaves his own party to help me, and he didn't even have to.

Fantastic. Now I owe him.

I'm not worried, though. What are the chances he'll need me to do anything before the month is up?

But when a woman shows up with a kid at her side, knocking on Parker's door, it turns out those chances are pretty good...

Three hours later, Skylar hollered at him from her bedroom. "Are you sure this will be okay? I can wear a different dress."
"Woman," he growled. "If I come back there, that dress is coming off you and we're not going at all.
"Not helping here. I'm not exactly chomping at the bit to go."
"Can I bribe you?"
She smiled at her reflection, willing the sadness away from earlier. She had to get her game ace on as it was time to meet the parents. "Probably. I'm pretty easy."
"Not even close. You've played hard to get for over the past year."
She cut her gaze to the door and had no doubt he was there leaning against the wall waiting for her to summon up her rapidly waning courage. Baby momma had already met them. Something Parker wasn't telling her and part of her wanted to ask, but she decided it wasn't any of her business.
This was what happened when you had a fake arrangement set up. Feelings got hurt and she would just have to live with it. She'd given her word and no matter how difficult this was becoming for her, she wasn't going to quit.
Besides, it's not permanent. He will be back to work soon and gone. Then I will be back to my old life.
Running another look over herself, she wished she felt better about this. She'd piled her hair up in a high ponytail, allowing the curls to fall free. Her burgundy dress had long sleeves, ruching yet flattering to her figure. Gunmetal strappy heels with a four-inch height were sleek and hopefully sophisticated enough for her to pull this off.
"Please don't let me fall on my face."
"What was that?" he called out.
"Nothing. I'm coming, I know we have a reservation."
She stuck her tongue out at herself and tried to provide another mental pep talk. The last time she had gone to see someone else's parents she'd been—Another door slammed on the memories she didn't need to revive tonight.
With another much needed deep breath, she opened the bedroom door and froze. Holy shit. Parker was leaning against the wall, much as she'd suspected but what she hadn't counted on was how damn delicious he would look in a suit.
All her lady parts were wide awake now. The man slayed in jeans and a tee-shirt. This was that on another level. The broad shoulders he had even more amplified and the muscled legs made her weak in the knees.
"Shit, you're gorgeous." He pushed away from the wall and neared her, taking up what little common sense she had left. Parker stopped i front of her and ran his hungry gaze over her again.
"Thank you." She reached up and adjusted his tie, not that it needed it, but she had to have some excuse to touch him. "You clean up pretty well yourself."
"They can eat alone." He prowled closer.
"No. Stop." He drew up short, lust overflowing in his eyes. "We have a dinner engagement. Let's go."
"Ballbuster." The smile tilting up his kissable lips removed any sting there would have been.
"It's what you get for agreeing to this in the first place."
She made sure Alpin had water and gave him some treats as they went out through the garage to her truck. Parker led her to the passenger side and helped her in.
"Just so you know, I'm going to be hard and uncomfortable all night because of that dress."
She gave him a sugary sweet smile. "Be glad you're not in a thong, those aren't exactly comfortable you know." Guess I'm getting the hang of this flirting thing.
"Killing me here, baby."
She patted his cheek. "My misery is your misery. Let's go. Don't want to be late."

THIS EXCERPT *insert arm flails and giddy laughter* I can feel Skylar and Parker's chemistry and I like it very much. I love me a military man, plus we have "bad-boy next door" AND fake dating? Hello~ Aliyah Burke knows what buttons to push. I'm not familiar with her books but better late than never, am I right? 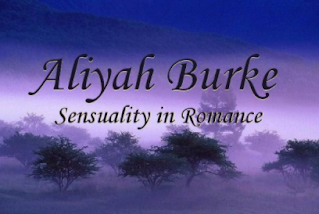 A USA Today Bestselling author, Aliyah Burke is an avid reader and is never far from pen and paper (or the computer). She loves to hear from her readers and can be reached via social media platforms or email.
She is married to a career military man, and they are owned by 4 Borzoi. Her days are spent sharing her time between work, writing, and dog training/showing.

a Rafflecopter giveaway
Posted by Jae at 8:00 AM