Hello, lovelies!
First I'd like to say, AMOUR AMOUR IS LIVE!!!!!

I can't wait to start it! All I've done so far is stare dreamily at the cover.

Today, The Fluttering Heart Book Nest is a stop in the Amour Amour tour and I was given the opportunity to interview Krista and Becca! *silently fangirling* For those who follow the blog (or talk to me), you know that I have a slight obsession with their Addicted series and its spin-off, Calloway Sisters series. I swear, they're like writing wizards. So when the twins announced they were writing a standalone with an acrobatic element, I was stoked. I still am. I mean, talk about a unique story plot! I cannot wait to dive in this weekend after my last final! Be sure to check out the other tour stops and don't forget to enter the spectacular giveaway at the end. Without further ado, I hope you enjoy our talk on Amour Amour, tv shows and more! :)

Hii girls! So happy to have you both here and congrats on publishing your first standalone novel! *tosses confetti and glitter* Not to mention it’s your 8th book, wowza. How did you celebrate release day? Was there cake? :D

Krista: Cake – most definitely! You can’t call it a celebration without some chocolate cake ;)

Becca: And we watched Center Stage, one of our favorite movies. It’s still just as good as it was the last time we saw it :)

Hooray, chocolate cake! I haven't watched Center Stage before so I'll have to check it out during the holidays. All right, let's get down to business. Tell us a little about Amour Amour and what sparked the flame to start writing it.

Krista: We always loved the circus and acrobats and the “behind-the-scenes” of it all. But it wasn’t until we went to Vegas in February and saw a show in that atmosphere did it all click. It was something that just grabbed us from the start.

Becca: Definitely Vegas, like Krista said. The atmosphere made us crave to write in that world, and the cast of characters in Amour Amour grew out of it.

How does the feel of it compare to your Addicted/Calloway Sisters series?

Krista: It’s definitely more like Hothouse Flower than any of the books. It’s fun but there are emotional elements. I would say it strays the furthest away from the Addicted series. No angsty times in this one.

Becca: I’d say in between Hothouse Flower and Kiss the Sky, more like the Calloway Sisters series. Nikolai and Thora aren’t childhood soul mates like Lily & Lo (from the Addicted series). They meet each other for the first time in Amour Amour.

Did you find it difficult moving away from the Addicted gang? I love that Amour Amour is still in the ‘Addicted world’ though. I just know I’ll get all giddy seeing the characters drink Fizzle products or mention Cobalt Diamonds or something!

Krista: It’s always refreshing to write new characters, but there’s that itch to get back to the Addicted gang for sure. And I loved that we were able to incorporate the Addicted universe into Amour Amour! It made it so much more special.

Becca: I think we both know that one day the Addicted series will end. As much as we love those characters, so much, we know we’ll have to let go and our readers will too. So for us, Amour Amour was our way of showcasing what we can do outside of the series, so that we’ll all have an easier time saying goodbye and moving on to a different world that we’ll someday create. And hopefully it’ll live up to the magic of the Addicted series, just in a different way.

Were there characters that you found easier to write than others?

Krista: I definitely felt like Thora and John were the easiest to write for me. John is probably my favorite of all the supporting cast in Amour Amour. He’s just this moody, really cynical guy but he’s also very popular. It’s a bit of a conundrum that I love.

Becca: I loved writing Nikolai and his siblings; the dynamic between all the Kotovas was so much fun to develop over time. But Thora was probably the easiest because we were in her point of view – and her narration cracks me up still. I’m so sad we’ve already had to say goodbye to her.

We know how much you both love superheroes and fandoms, and we saw that through Lily and Lo in the Addicted series. Will that pop culture element be seen in Amour Amour as well?

Krista: Oh yes! There will always be some pop culture in our books! The day we can’t add them in (for some reason or another) will be a sad day indeed. Thora loves paranormal romances, so you’ll see some shout outs to popular TV shows as well as other references.

Becca: We live for pop culture! It’s something we love so much, so we try to sneak things in wherever we can.

If you could spend the day with one of the Amour Amour characters, who would it be and what would you do?

Krista: I would without a doubt spend it with Thora. I love her. I hope that we’d be friends if fiction and reality ever crossed paths. We’d hang out, talk PNR books, and maybe sightsee around Vegas.

Becca: I would pick Thora too! Okay, I’ll choose someone else then… Nikolai. He would be incredibly intimidating, yes. But he’s oh so sexy. And I think I’d want him to show me some *ahem* moves…aerial moves that is :)

If you were sent on a mission to test the habitability of an unknown planet (yay for The 100!!) with the Amour Amour characters, who would you stick close to and must have as an ally?

Krista: The 100 is THE BEST! *fist bumps* If this scenario happened, I would be attached to Nikolai’s hip. Sorry, Thora! But Nikolai is strong, tall, and will protect everyone he loves. A perfect ally. My second choice would be Dimitri…not the nicest guy in the bunch. At all. But he’s also strong and he doesn’t have girlfriend. Maybe I could reform him. Okay, this is taking a turn *looks to Becca before I get carried away*

Becca: Nikolai, without a doubt! He’s a natural protector. It’s one of his biggest personality traits (he may share this with a certain Addicted character) and he’s really athletic. I can see him making smart decisions under pressure too, so he has such a “leader” vibe. I am definitely clinging to him!

Now for some fun get-to-know-you questions! I started watching Teen Wolf because you two recommended it way back when (it’s the best, I need season 5 yesterday) and I’m catching up on Arrow and The 100 now, so I’m curious to know: What are your top 3 currently-airing TV series?

Krista: Great question! Teen Wolf, I guess doesn’t count because the new season hasn’t started yet.
1. The 100
2. The Vampire Diaries (this season is VERY good)
3. How to Get Away with Murder

What about your top 3 books you’ve read this year?

Krista: I haven’t read as much as I’d like this year, but here’s my top 3:
1. The Beginning of Everything by Robyn Schneider
2. The 5th Wave by Rick Yancey
3. Half Bad by Sally Green

Krista: Becca. Definitely. I can ignore his cuteness. It’s hard but I can do it.

Becca: Me. He will just look at me with those wide eyes like “play with me!” and I’ll spoil him for an hour by acting like I’m his cat-friend.

And to finish off this interview: You are drinking the last can of Diet Coke/Red Bull. Who is more likely to go out and restock their stash right away?

Krista: Me. No question. I have walked literal miles to obtain Diet Coke on a shortage.

Becca: KRISTA! I will go without Red Bull for weeks to months and I can manage. I’ll only drink it when I want to stay awake to keep writing. Krista has trouble surviving 48 hours without Diet Coke. It’s an addiction!

Hahahah! From the latest Fizz LIVE though, we've seen what happens when you go without Red Bull, Becca ;) But thank you, THANK YOU girls for doing this interview <3 It was so much fun!

Krista & Becca: Thanks Jae for having us on your blog and for the lovely questions!! <3 <3 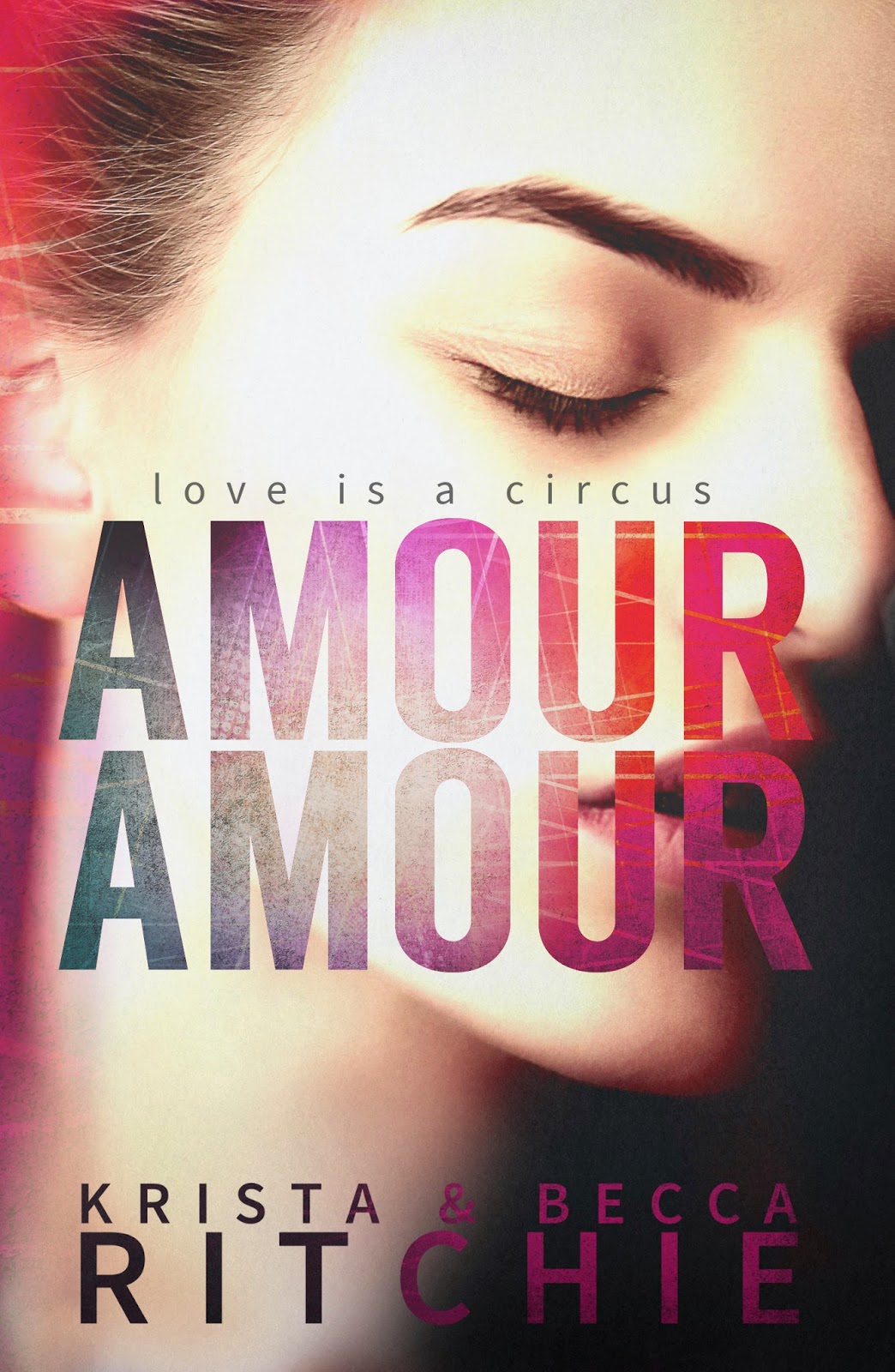 Love is a circus

"Every day,” he says lowly, “I hold a person’s life in my hands. The circus is based one-hundred percent off trust. I give it all to someone, and they give it all to me.”

The best aerial technique won’t land 21-year-old Thora James her dream role in Amour—a sexy new acrobatic show on the Vegas strip. Thora knows she’s out of her element the second she meets Amour’s leading performer. Confident, charming and devilishly captivating, 26-year-old Nikolai Kotova lives up to his nickname as the “God of Russia.”

When Thora unknowingly walks into the crosshairs of Nikolai’s after-show, her audition process begins way too soon. Unprofessional. That’s what Nik calls their “non-existent” relationship. It’s not like Thora can avoid him. For one, they may be partners in the future--acrobatic partners, that is. But getting closer to Nik means diving deeper into sin city and into his dizzying world.

Thora wants to perform with him, but when someone like Nikolai attracts the spotlight wherever he goes—Thora fears that she’s destined to be just background to his spellbinding show.

This sexy and exhilarating New Adult Romance can best be described as Cirque du Soleil meets the steamy, athletic romance of Center Stage. 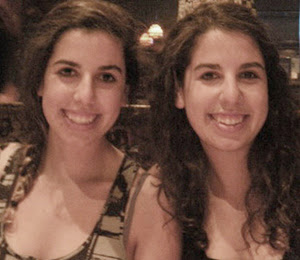 Krista & Becca Ritchie are identical twins—one a science nerd, the other a comic book geek—but with their shared passion for writing, they combined their mental powers as kids and have never stopped telling stories. Now in their early twenties, they write about other twenty-somethings navigating through life, college, and romance. They love superheroes, flawed characters, and soul mate love.

a Rafflecopter giveaway
Posted by Jae at 12:29 AM