Hello from the other sideeeeeeeee. Pretty sure I've ascended to book heaven because TODAY is Damaged Like Us release day, and it's in my kindle library looking all gorgeous, calling out to me like a siren. To be absolutely honest, life took over since the fall and my excitement for this book after finishing Some Kind of Perfect was only average. Not that I wasn't anticipating it because HECK YES we're diving into the lives of the Addicted kids and I'll cling to this era as much as I did the first! It wasn't until Krista and Becca starting announcing news and updates for DLU that it hit me like a freaking truck. I'm so hyped, I'm flying. I won't be able to start right away but still. IT'S. HERE. DLU. IS. LIVE. It is a happy day! *gets out cake and ice cream*

If you haven't heard of this series/book/authors, I highly recommend checking them out. Krista and Becca excel at family dynamics and heart-warming-sometimes-wrenching relationship development. You'll be sucked into these characters and their 'universe' right away. Hope you enjoy the excerpt! I'm still grinning. 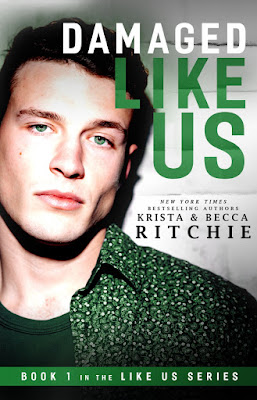 
Don't date your bodyguard.
It was the one rule he had to break.

Maximoff Hale is a force of nature. A ship unwilling to be steered. Headstrong, resilient, and wholly responsible—the twenty-two-year-old alpha billionaire can handle his unconventional life. By noon, lunch can turn into a mob of screaming fans. By two, his face is all over the internet.

Born into one of the most famous families in the country, his celebrity status began at birth.

He is certified American royalty.

When he's assigned a new 24/7 bodyguard, he comes face-to-face with the worst case scenario: being attached to the tattooed, MMA-trained, Yale graduate who's known for "going rogue" in the security team—and who fills 1/3 of Maximoff's sexual fantasies.

Twenty-seven-year-old Farrow Keene has one job: protect Maximoff Hale. Flirting, dating, and hot sex falls far, far out of the boundary of his bodyguard duties and into "termination" territory. But when feelings surface, protecting the sexy-as-sin, stubborn celebrity becomes increasingly complicated.

Together, boundaries blur, and being exposed could mean catastrophic consequences for both.

Maximoff Hale POV
“Number twelve.” I nod to the list.
He eyes me for a long moment before focusing on the paper. “It says that you’re not used to letting other people behind the wheel.” It actually says I always drive.
I glance at him once, then back to the road. “I didn’t realize that you can’t read.” I switch lanes.
I can almost feel his smile stretch. “Always a precious smartass.” I hear him flip a page. “You have a typo on number thirty-two.”
He called me precious. What the fuck does that even mean? Precious. I have to let it go, but the word scrolls across my gaze like a tickertape banner. “What typo?”
“You forgot a comma.”
I let out an irritated groan. “This isn’t a term paper. Don’t critique my grammar.”
Farrow kicks up one of his shoes on my seat. Balancing his forearm on his knee. Then he bites the staple off and spits it out. I tense and try to watch him and the road simultaneously.
He has a very particular way he moves his hands. They shift with meticulousness and care. A sort of accuracy that belongs to surgeons and someone equipped to disassemble and reassemble a gun blindfolded.
I’ve imagined those hands on me too many times to count. Don’t fucking restart now. I’m trying not to, but having him this close, the NC-17 fantasies vie to breach the surface. Heat blankets my skin and tries to grip my cock.
Thumbing through the papers, Farrow tells me, “You’re about to miss our exit.”
“Shit.” 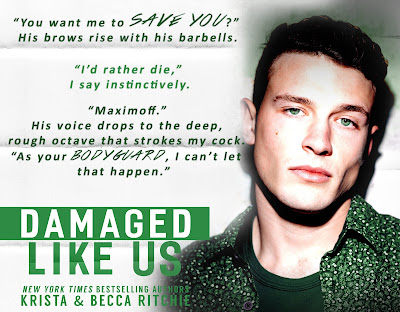 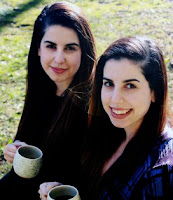 Krista & Becca Ritchie are New York Times and USA Today bestselling authors and identical twins—one a science nerd, the other a comic book geek—but with their shared passion for writing, they combined their mental powers as kids and have never stopped telling stories. Now in their early twenties, they write about other twenty-somethings navigating through life, college, and romance. They love superheroes, flawed characters, and soul mate love.

*$50 Amazon Gift Card
*Signed Paperback of Damaged Like Us
Open internationally!
a Rafflecopter giveaway
Posted by Jae at 8:00 AM