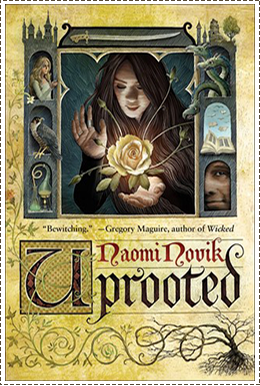 Agnieszka loves her valley home in a quiet village. But the corrupted Wood stands on the border, full of malevolent power, and its shadow lies over her life. Her people rely on the cold, driven wizard known only as the Dragon to keep the Wood's dark forces at bay. But he demands a terrible price for his assistance: Every ten years, one young woman must be handed over to serve him without questions.

The next choosing is fast approaching, and Agnieszka knows—everyone knows—that the Dragon will take Kasia: beautiful, graceful, brave Kasia, all the things Agnieszka isn't, and her dearest friend in the world. Ad there is no way to save her.

But when the Dragon comes, it is not Kasia he will choose.


I still don't know what led me to believe Uprooted to be only a Rapunzel-inspired retelling. The synopsis doesn't even give a hint to that, but it could be how my brain connects 'tower' with 'Rapunzel' hah. Either way, my expectations were completely blown away in the best way possible! Think Into the Woods meets Studio Ghibli with hints of D-Gray Man's dark imagery. Uprooted was incredibly enchanting and imaginative. The narration had that classic lyrical fairy tale vibe, and I felt compelled to keep reading until the end.


Agnieszka is the main character of this magical tale. I was not her fan at the start. She didn't stick out as a memorable heroine and then I realized she wasn't supposed to. She grew up in the shadow of Kasia whom everyone believed to be the next chosen 'sacrifice', and Agnieszka's best friend. Compared to Kasia, Agnieszka was less than average in smarts and skill. It wasn't until she was separated from her family and friends, that her character traits started to grow. Where most characters we meet in the novel were more concerned about the Wood, her thoughts were always on the people and how to protect them first. Agnieszka's biggest strength was her sense of empathy and compassion.

I really enjoyed the character development of Kasia and Sarkan (aka the 'Dragon') as well. Based on villagers' descriptions and what we learn about Sarkan through little notes left behind by past offerings, he's very much alone. Seeing his unapproachable, powerful wizard mask dissolve was the cutest thing. There was no clear cut timeline after Agnieszka was taken to the tower, so I didn't feel her relationship with the Dragon was rushed at all. His frustration with her inability to pick up his teachings was so amusing. Their interactions were my favorite! Agnieszka x Kasia friendship was heartwarming too. I didn't expect to read much on Kasia or like her so much, but she grew on me and her bravery was very admirable!

Storytelling wise, I didn't get sucked into Uprooted until a couple chapters in. There came a turning point where the plot unexpectedly picked up and it was non-stop heart-racing intrigue and action. I was hooked! The writing was so descriptive I could almost see it in my mind's eye, including some of the darker and gruesome details. There are lots of metaphors which cut the flow at times because I had to reread certain parts over to understand. I did feel that my watching anime and Japanese animated films helped me grasp the imagery of the more fantastical elements of the story better. Highly recommended for retelling/fantasy lovers!

I read that Uprooted will be adapted to a movie and I cannot wait for it to hit the big screen!
Posted by Jae at 7:46 PM