2019 Confession: I had this review drafted and incomplete for about 3 years [shame on meee]... I've left everything as is and just added a bit to my FH review after a reread. Finally I can let it out into the blogosphere!

~*~
I started these books the last week of winter term—before final exams. Nothing like some sweet and sexy romance books from one of my all-time favorite authors to get my heart thumping and raring to go for my exams right? Hahahah. Not. I didn't know what I was thinking, but even with the need to study, I wasn't able to stop reading. I couldn't fight the temptation!! It may or may not have been the covers calling out to me as I skimmed through my library putting together a summer tbr. What can I say, half naked firefighter covers are a weakness of mine. From the first chapter, I was on a PC [Pamela Clare] high and zoomed through Slow Burn and Falling Hard as if my life depended on it! 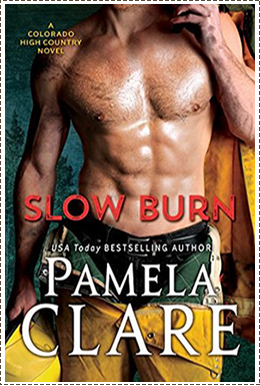 
Victoria Woodley is done with men. Fresh off a dating nightmare, she flies from her home in Chicago to Scarlet Springs to take part in her best friend's wedding. Who picks her up at the airport? Eric Hawke. Of course. She made a fool of herself over him last time she was here. He's cocky, charming, and sexy as sin. But the fact that she's attracted to him is all the proof she needs that he's bad news. She would ignore him if she could. But he's the best man, and she's the maid of honor. She can't just tell him to jump in a lake—especially not when her lips are locked with his.

Eric isn't looking for a relationship. Between running the firehouse and volunteering for the county's search and rescue team, he has enough on his plate. He doesn't need to get tangled up with a woman from the big city, especially one whose idea of roughing it is going without designer coffee. Yet form the moment he looks in Victoria's big brown eyes, the attraction he feels is too strong to deny. Faster than he can imagine, the spark of desire that has smoldered between them since the first day they met will flare into full-blown passion.

But can Eric convince Victoria to set aside her doubts and trust him with her heart before their time together runs out?

"You can change your mind, you know. That's the cool thing about still being alive.
There's time to change everything."

Eric Hawke is equal parts sexy, kind, thoughtful and humorous—the perfect example of my dream book boyfriend! Put him together with the rest of the Search & Rescue Team crew and I was in hottie heaven. I didn't feel overwhelmed by the number of names being dropped this time around, and I think I enjoyed Slow Burn that much more because I already knew most of the characters. All of whom I adore greatly, I must say. You know that feeling when there's a secondary character that worms into your heart, and you want nothing but for them to have their own story/happy ever after? Yeah, that's me... For everyone on the team.

I really enjoyed the relationship development between Eric and Victoria. They're both charming and my heart warmed with how deeply they care for their friends, and the compassion they show for others living in their town, especially to Bear. I fell for them both quite easily. Eric's idea for a wedding present to Lexi and Austin was so darn thoughtful *sigh*. What. An. Amazing. Friend he is, my goodness. Slow Burn started off with a flashback of their first meeting which happened in Barely Breathing. Note to readers: this book can be read as a stand-alone but I personally recommend reading the first of the series for the full introduction to Scarlet Springs! Eric and Vic had natural chemistry and I always ended up grinning/clutching my heart/squealing during their dialogues. It was always a fun time when the group got together to hang out. The friendship dynamics in this book are wonderful! When the team "rolled out" to help Eric with a favor, my stomach hurt from laughing #friendshipgoals. Overall, a very sweet story with good build up and wonderful characters! Give me a charming and caring firefighter ANY. DAY. 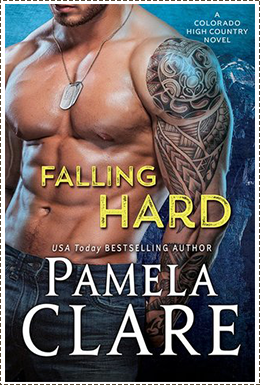 Ellie Meeks promised her pilot husband that if anything happened to him, she would live her life to the fullest. Three years later, she is still alone, raising twins he never met. She has no interest in dating or meeting men—until one snowy night when a stranger helps her get her sick kids safely home. That stranger turns out to be a former Army Ranger and a member of the elite Rocky Mountain Search & Rescue Team. He's also tall, rugged... and irresistibly sexy.

All it takes is one kiss...

Jesse Moretti came to Colorado to get Iraq out of his head, using the adrenaline of extreme sports and high-risk mountain rescues to keep his mind off the past. But getting involved with Ellie might be the riskiest thing he's ever done. It's not just their explosive chemistry. There's something about Ellie that gets inside him, opening him to feelings he's tried hard to ignore.

Ellie feels alive in Jesse's arms and happier than she ever thought she'd feel again. But their relationship comes at a price fro him, and soon Ellie sees that she must help Jesse fight the demons of his past to protect the love of a lifetime—and save the heart of a hero.

"The only thing we can depend on is each other. We'll deal with whatever happens.
I'm not afraid of what's inside your head."
You should know I'm weak against single parent stories. It's like my kryptonite, plus Daisy and Daniel are the cutest twins ever! Despite having read multiple novels by [literary queen] Pamela Clare, I have yet to find a pattern in her writing. This is by no means bad (I know what I like and tend to binge after all) but I usually start to notice some sort of plot formula for authors I've read more than 10+ books, especially in the romance genre. Pamela Clare's books have such a distinct tone that I easily fall into the story and its characters. Falling Hard is no exception. Ellie Meeks is by far my top Colorado High Country heroine [2019 edit: I am officially caught up with the series and STILL feel this way about her].
Both our main characters have experienced pain and sorrow in some form. Although Ellie and Jesse are neighbors, they've hardly interacted. When a snowstorm hits and Ellie finds herself in a predicament, Jesse happened to be by and helps her. Jesse is such a polite guy. Their first dialogue together had me smiling just because he called her "ma'am"...I am so easily pleased heheh. Neither of them are really interested, or ready, for a relationship but their kind and caring nature draws them together. Chemistry is a magical thing and the slow burn romance was superb.
As this is the third Colorado High Country novel, we're familiar with the Search & Rescue Team members and their adoring friendship dynamic. In Falling Hard, we meet Ellie's sister Claire who is actually the best secondary character in the book. When she asked Ellie if she noticed "the bulge", or when she mouthed "he's got muscles", I knew she was my girl. Pamela Clare continues to give me new characters to love and protect. What I've come to really enjoy about the Colorado High Country series is learning about different careers in the mountains of Scarlet Springs. I don't travel often so the details and imagery help me visualize the setting and immerse me further into the story. 10/10 would recommend!
-  -  -  -  -  -  -  -  -  -  -  -  -  -  -  -  -  -  -

The Colorado High Country series mainly centers around the members of the Rocky Mountain Search & Rescue team of Scarlet Springs. Each book can be read as a standalone but I highly recommend reading them in order! Just please don't start with Chasing Fire as it's a mash-up of the characters from this series and those of Pamela Clare's I-Team series. You might get overwhelmed by all the names heheh.