Hello, darlings! FUEL THE FIRE IS LIVE WOOT WOOT *rolls out the cake* It's the last day of the blog tour and I'm super excited to share this post with you! All the stops in this tour have been so freaking awesome—I am certain these girls possess magical powers. For Connor and Rose's first tour, it's PRETTY. DARN. EPIC. The dynamic of the Addicted characters is one of my all-time favorites. I love their friendships...their love. For today's post, Lily, Lo, Connor, Rose, Ryke and Daisy will be playing the game 'Taboo'. How the game works:
We know how well the couples work together, so significant others will be split for some good ol' fashion boys vs. girls! Be sure to check out the other stops (click on the tour banner) and enter the giveaway at the end. Hope you enjoy!!

Rose, Lily, and Daisy settle on a couch opposing their significant others: Connor, Loren, and Ryke. They’re all prepared for a game of taboo. Losers have to clean the dirtiest rooms in the house.

Rose: This game just benefits Ryke and Daisy since my room is already spotless.
Ryke: You think I want you or Connor messing with my shit?
Loren: Then we should change the rules to losers clean my room because it could use some dusting.
Lily: (who shares a room with Lo) …yeah, but one of us is going to lose. We’re on separate teams and then we have to clean our own room.
Daisy: How about the losing team—
Rose: The boys.
Connor: *grins* we’ll see about that, darling.
Ryke: What were you saying, Dais?
Daisy: Just that the losing team has to cook a five course dinner and the winner plans the menu.
Lily: *nods repeatedly* I like it.
Rose: Me too.
Loren: *glares* you’re going to make us cook something impossible, aren’t you? Like Crème-whatever.
Connor: We’re not going to lose, so don’t worry about the repercussions.
Rose: *narrows eyes* that’s how you encourage your teammates, Richard? False hope?
Connor: It’s not false hope when I know it’s true. *grins again*
Rose: *eyes flit to his lips* I hate your smile.
Daisy: Team names! *stands to write on the white board and draws a line down the middle* What did you guys pick? *looks between Ryke, Loren, and Connor on one couch*
Loren: Team 1
*silence*
Lily: That’s really it?
Connor: It’s the most accurate name.
Loren: What’d you girls choose?
Lily: Gryffinclawpuff. It’s all of our Hogwarts houses squished together.
Loren: *looks to Connor* I say we rename our team to Slytherin.
Connor: No.
Lily: That was a very Slytherin thing to say.
Loren: I’m not squishing my house name with Gryffindor and Ravenclaw *cringes* maybe if I had an adorable little ‘puff on my team, it’d be different.
Lily: *blushes*
Rose: *clears throat* let’s begin. I’m restating our pre-planned rules: we’re only doing one taboo card per round. Your team has thirty seconds to guess. If you need any more than that, you’re automatically a loser. First team to 3 points wins. We flipped a coin, and boys are going first.

*Loren picks a card and stand in front of the white board, turning towards his team*
Rose: I’m starting the timer now.
Loren: Lily cried at the beginning of this…thing when we were kids.
Ryke: *shakes his head in confusion*
Connor: “Thing” could refer to numerous categories.
Loren: *scratches the back of his neck* It’s a…fuck. I can’t say the word. It’s one on the back of the card.
Rose: Fifteen seconds left.
Loren: Lily always thought it was a good porn name—not that she was ever thinking of porn. *looks at Lil to see if she’s okay*
Lily: *raises her hand like she knows the answer*
Ryke: Are you playing with your fucking wife or with us?
Rose: Eight seconds.
Loren: *shoots her a glare* I get it. I’m running out of time.
Connor: Concentrate, Lo.
Loren: Daisy…was this for Halloween.
Ryke: A fucking deer.
Loren: *gestures for him to extrapolate*
Rose: *points at Lo* cheating! No hand gestures.
Loren: *spins on her* I vote that Team Gryffinwho gets a goddamn silent treatment from their team leader.
Lily: *whispers* Gryffinclawpuff.
Rose: That’s time.
Lily: Bambi!
Loren: Good job, Lil.
Rose: We should get a point for guessing correctly.
Connor: That’s not how this game works.
Rose: Fine.

*Rose stands and picks up a card*
Connor: Time starts now, darling.
Rose: A magician does this to have power over their subjects.
Lily: *frowns* this magician sounds mean.
Rose: You’re supposed to be guessing.
Connor: Twenty seconds left.
Rose: *back straightens*
Daisy: Lily, do you know any Harry Potter curses that forces people to do their bidding?
Lily: But would Harry Potter be on the card.
Rose: Forget the magician part—okay sometimes it’s used for therapy…and it puts the patient in a catatonic state.
Connor: Ten seconds left.
Lily: Now I’m confused.
Daisy: I’m totally confused too. I thought this was going to be a spell.
Rose: It’s like a spell.
Lily: Voodoo.
Rose: No.
Connor: Time’s up. And I believe the correct word is hypnosis.

Ryke: We fucking suck at this *stands and picks a card*
Connor: There’s definite room for improvement on your end.
Ryke: *flips him off and looks at the card*
Rose: Timer starts now.
Ryke: When you get out of a fucking shower or what a girl should be right before you fuck her.
Connor: Wet.
Rose: That was too easy.
Connor: Hypnosis was just as easy.
Rose: *crosses arms* I disagree, Richard.
Ryke: *high-fives his brother on his way back to the couch*

*Connor retrieves a card and almost grimaces*
Rose: Timer has started.
Connor: An unrealistic creature that’s often accompanied with rainbows and glitter.
Loren: *laughs* I’m not sure what this is…
Connor: We’re playing a team game.
Loren: Can you just describe it a little more for me, love?
Connor: People like to believe in this thing because it takes an ordinary animal and turns it into something unique. And yet, it’s not real.
Rose: Ten seconds left.
Ryke: *looks to Loren* should we let him off the hook?
Connor: Do you both want to cook a five-course meal?
Loren: Uni—
Rose: Time!
Ryke: Fuck.

*Lily picks a card*
Connor: Time starts now.
Lily: This is the guy that Lo always refers to and he goes…I eat you… *blushes* but not in a dirty way! Or maybe…it is but still, he’ll say Me…blank, You Jane—oops…
Rose: You said a word you couldn’t, didn’t you?
Lily: *crinkles her nose* sorry.

*Ryke picks the next card*
Rose: Time starts now!
Ryke: You can kill someone this way and involves lack of oxygen or it’s probably something Connor & Rose like to do during sex.
Connor: Strangle.
Loren: *laughs* who would have thought you two would be such a power couple during this game?
Ryke: *glares and flings the card at his brother’s face*
Connor: *ignores Ryke with a faint sign of agitation on his normally impassive face*

*Rose picks a card*
Connor: Time has started.
Rose: Long…hard and sometimes it has little dimples on it.
Lily: *brows furrowed* *looks to Daisy and whispers* penis?
Daisy: *speaks loudly* Cock.
*Ryke & Loren are laughing*
Rose: *glares at everyone* No, it’s not a penis. It’s something you eat.
Lily: *frowns deeper* Are you…sure it’s not one?
Daisy: But you don’t eat a penis.
Lily: Oh…right.
Rose: It’s green! *sighs* that’s one of the words I can’t say.
Loren: So it’s the Hulk’s dick then? *can’t stop laughing*
Rose: It’s a pickle.

*Loren picks a card*
Rose: I’m timing you.
Loren: No shit… *looks at the card and nods to his team* Pussy.
Connor: Cat.
Loren: No. It can also be a term of endearment.
Ryke: Kitten.
Loren: *smiles* yep.

Connor: *turns to Rose* what were you saying about Team 1?
Rose: *raises her hand at Connor’s face*
Daisy: You all won, so what do you want us to cook you.
Ryke: I’ll cook—
Loren: No, we won. That means they cook.
Ryke: I feel fucking bad. Five courses is a lot of work.
Loren: Then we do a taco bar. The five courses can be toppings.
Connor: *nods in agreement*
Lily: Are you all sure?
Loren: Tacos are the best prize, love. *pulls her into a hug*
Lily: But not as good as *whispers in his ear*
Loren: *smiles wider* yeah, definitely not as good as that. It'd take the impossible to hurt Connor Cobalt, even for a moment.

At twenty-six, his narcissistic tendencies have made room for the people he loves.

And he loves Rose. But when his love is threatened, when his greatest dreams are compromised—what is the cost then?

Love will guide his choices. For the first time in his life.

**Note: Calloway Sisters spin-off series can be read separate from the Addicted series, but I highly recommend reading both because it's so much more enjoyable that way! You can find the recommended reading order here.** 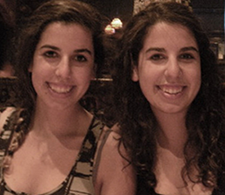 Krista & Becca Ritchie are identical twins—one a science nerd, the other a comic book geek—but with their shared passion for writing, they combined their mental powers as kids and have never stopped telling stories. Now in their early twenties, they write about other twenty-somethings navigating through life, college, and romance. They love superheroes, flawed characters, and soul mate love.

a Rafflecopter giveaway
Posted by Jae at 12:23 AM