Review: EVERLY AFTER by Rebecca Paula 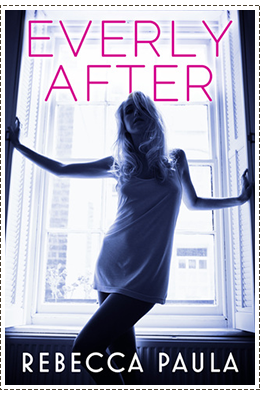 
All truths burn bright and clear. I'm still waiting in the dark.

Everly Monteith has traded her life of glitter, parties, and self-destruction for waitressing in a Parisian café. She's put the tragedy that sent her across the Atlantic in the past—until her toxic ex shows up and sends her reeling once more. Her fresh start begins slipping away until a smug British war correspondent crashes her party. But falling for Beckett means letting down her guard, something that might put them both into the dark.

There are beautiful lies in this world, and it takes me being chased through a hallway at a rave to decide this girl is one of them. But even the most beautiful lies aren't worth chasing.

Twenty-five-year-old Beckett Reid is forced into sabbatical after being kidnapped on assignment in Afghanistan. Back in Paris, he locks himself away to work on a novel, focused on saving his budding journalism career. But when he meets an enigmatic American heiress, his plans are quickly neglected. Everly is the perfect replacement for dangerous war zones, even if she does leave glitter on everything he owns. Reckless and wild, she runs through life making more mistakes than anyone he's met, but Beckett is determined to fight for her, even if he must face the messy truth that he must fight for himself first.
*This New Adult romance is recommended for readers 18+ due to mature content.*

"Sometimes there's good in what scares us."

Everly After isn't what I'd classify as your typical new adult contemporary read. It had quite a dark and depressing tone during many parts of the book. Mainly because of the heroine, Everly. She's settled into a life that she doesn't find meaningful. She's very much struggling to find a purpose, and it made me sad to see her take one step forward only to go back five. She made a lot of poor decisions which made her a hard character for me to like. Nonetheless, I really enjoyed this book and not only because Beckett swept me off my feet! What I loved most about Everly After was that the main characters didn't fix each other's imperfections. It was more that they helped each other admit to them  and move forward as individuals. Rebecca Paula has written a beautiful story about two broken people loving each other enough to support them at their lowest.

Everly After is told in the alternating POVs of Everly and Beckett, both of whom have their own personal struggles. With the alternating chapters, there's just the right amount of overlap to let the story flow nicely.  Everly, a former Manhattan socialite, fled to Paris to avoid the media attention after certain events. She's an emotional mess and her unhealthy, complicated relationship her ex doesn't help the matter. Beckett, on the other hand, was a journalist and former war correspondent. He arrived in Paris to attend therapy after the trauma he faced in Afghanistan, but wants nothing more than to return to the field. He meets Everly at a party and BAM, instant attraction.

Beckett brought out the good and calm side of Everly that I liked. They were incredibly adorable and amusing together. There's a quality to Everly's character that draws you in regardless of the flashing warning signs to stay away. And I felt like that's how it was for Beckett, and the reason behind him wanting to help her. Although I didn't find his storyline as intriguing as Everly's, it was admirable how he continually stuck by her side through all the bad choices she made. There weren't many secondaries that played a big role or stood out besides one. I disliked this person from the get-go. There was a part in the novel that kind of threw me for a loop. I knew something bad was bound to happen but I didn't expect that! Everly After was a rollercoaster, as was Everly's character development. My emotions were everywhere! I'd be happy one chapter then close to frustrated tears the next. You can't help but hope that Everly would move in the right direction and I found myself in a love/hate relationship with her.

Another part of this book that I loved was how the ending played out (even if I had a slight urge to throw my phone at one point haha). To be honest I wouldn't have mind, had it ended with the cell phone message because it highlighted how much Everly grew to have made that decision. Everly After was unique and touching. There was an unexpected depth to the plot and characters that I found very gripping. I look forward to reading another one of Rebecca Paula's novels soon!!

"I think the messier bits in life should be worn like a badge of courage sometimes,
a sign for you to say you've lived—are living."

You can check out my character fancasts for Everly After here :)
Posted by Jae at 10:47 AM