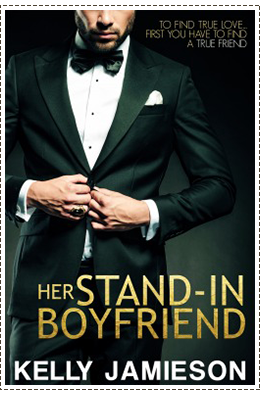 This boyfriend business is about to get a whole lot more personal...

Event planner Lexi Mannis has a busy life in Chicago—too busy to have a boyfriend. For special occasions, she has her Stand-In Boyfriend, Mac Northrop. Mac offers (almost) all the perks of a real boyfriend—furniture assembly, a date to big events, and someone to cook for. But they've never been "with benefits"...until one wickedly hot night crosses the line.

Mac's been in love with Lexi for ages. He knows he should probably end it but dammit, he just can't. When things get deliciously down and dirty, Mac is certain that he's made the leap out of the friend zone...until Lexi decides she wants to remain friends. With benefits.

What Lexi doesn't know is that she's running out of time. And if she won't promote Mac to Real Boyfriend, she might just lose her Stand-In Boyfriend to someone else...

"All relationships take time and work... If you want it enough, you make it a priority."

Her Stand-In Boyfriend is a quick, sweet and easy read. I really enjoyed the dynamic between Lexi and Mac. Their friendship felt natural. I didn't find the story to be angsty, and the plot didn't drag on with drama which was nice. It'd be a great one to pick up in between series or whenever you're looking for something light!

Lexi, is an event planner and focused on making a name for her business. She has no time for men and dating. Any free time she does have, she'd much rather spend it hanging out with her girlfriends. And for all the things her girls didn't enjoy, like going to beer festivals or seeing a hockey game, Mac was her guy. Mac is such a sweetheart. He's willing to put together furniture for his 'friend' which made me think HE'S A KEEPER. Lexi often refers to Mac as her 'stand-in boyfriend' *insert grin for title reference*. We get both povs in the book, and it's quite obvious that our boy, Mac had feelings for Lexi.  At first I was worried Mac was a pushover. That he was giving much more than getting in their friendship. But they worked well together, being each other's plus one, helping the other expand their professional connections while also just having a good time. That didn't stop me from feeling sorry for Mac though as his relationship with Lexi changed, but not in the way he wanted. It was during Mac's pov that I kept getting frustrated with Lexi for not realizing how amazing he was sooner!

It could be because of how short the book is (it's only 130 pages!) that I didn't feel incredibly convinced by Lexi's feelings at the end. It's clear that she cares for Mac but is she in love with him? Hmm. I did like that she took some time to think it through after seeing Mac with someone else though. Note: I didn't shelve this book as 'love triangle' because it wasn't a lasting theme in the story. Anyway, one thing I'm glad for was how she didn't instantly think that her being jealous equated to her being in love. For the most part, I liked Lexi. She's driven and won't give any guy who isn't accepting of her two gay fathers the time of day. Did I mention how adorable I find Lexi's Dad? Her Papa is sweet too and both are very supportive of her. But her Dad isn't the kind of guy you talk boys with and he'll just vamoose when the topic arises haha. There are very few secondary characters but those that do appear are great!

Overall, Her Stand-In Boyfriend is your classic friends-to-lovers book that I found enjoyable :)