Review: ME BEFORE YOU by Jojo Moyes 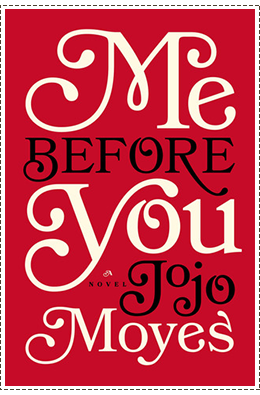 Title: Me Before You

Louisa Clark is an ordinary girl living an exceedingly ordinary life—steady boyfriend, close family—who has barely been farther afield than her tiny village. She takes a badly needed job working for ex-Master of the Universe Will Traynor, who is wheelchair-bound after an accident. Will has always lived a huge life—big deals, extreme sports, worldwide travel--and he is not interested in exploring a new one.

Will is acerbic, moody, bossy—but Lou refuses to treat him with kid gloves, and soon his happiness means more to her than she expected. When she learns that Will has shocking plans of his own, Lou sets out to show him that life is still worth living.

Me Before You brings to life two people who couldn't have less in common—a heartbreakingly romantic novel that asks, What do you do when making the person you love happy also means breaking your own heart?

"It has been the best six months of my entire life."

I am warning you, dear reader, that this review may contain spoilers. If like myself, you already have a sense of how this story will go (as I did after reading the synopsis of the sequel), or if you've read the book then go forth and read my jumbled emotions! Either way, this was an unforgettable read that everyone should give a chance. It's your choice whether to like it or not, of course.


Me before starting this book:

Me after finishing this book:

Me Before You swept me up into such a whirlwind of emotion that I don't really know how I feel. I loved this book. I hated it just as much. It's not often I read a book that makes me question my morals, let alone other's. But after finishing it, I literally sat on my bed thinking, What would I have done if I were her... if I were him? In the end I could only conclude that, like Lou repeatedly says in the novel, it's complicated.

Lou and Will led such different lives that you would've doubted them ever meeting had it not been for Will's accident and the job opportunity. Just thinking about it makes me sad. Their chemistry was undeniable. Within the amount of time he was in her charge, I felt like Will understood her better than her own boyfriend. I couldn't completely dislike Patrick. Even if he was always about marathons, there were little actions that did show that he cared for her. They wouldn't have been together for so long otherwise, you know? So although I wholeheartedly wanted Lou to fall for Will, I felt bad for Pat.

Me Before You is a book of choices. And I couldn't bring myself to fault Mr. and Mrs. Traynor of theirs. Or Will's for that matter even if it broke me to pieces. When you read a book such as this, you become more aware of the things you've taken for granted. Will changed Lou's life as she changed his. Their relationship growth was wonderful and I enjoyed seeing Will opening up to Lou. Their witty remarks to each other had me smiling. I really liked Lou and, like Will, I saw her potential. She's such a hard worker and I felt she gave 110% in everything she did. Her family played a huge part in the novel as well, and every time I read about their financial struggles I just wanted to hug them all close.

I liked how there were chapters in a secondary character's pov throughout the novel. There were times I wondered what their thoughts were on the matter, so getting inside their head for a few pages was great. I would have loved to have had a chapter in Will's pov near the end though, despite how painful it would undoubtedly be to read.

To be completely honest though, I'm not sure if or when I'll read the sequel. The story doesn't end on a cliffhanger so you could definitely read it as a standalone. But Me Before You was such an achingly beautiful story and has left a huge footprint on my heart. It's going to take me a while to be able to handle whatever happens next *slowly starts piecing heart back together with super glue*