Review: THIS LULLABY by Sarah Dessen 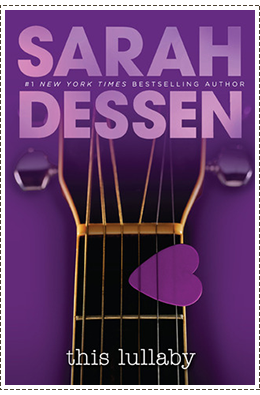 She's got it all figured out.

Or does she? When it comes to relationships, Remy's got a whole set of rules.

Never get too serious. Never let him break your heart. And never, ever date a musician.

But then Remy meets Dexter, and the rules don't seem to apply anymore.

Could it be that she's starting to understand what all those love songs are about?

"I had no illusions about love anymore. It came, it went, it left casualties or it didn't."

I enjoyed this one. Not as much as I did my first Sarah Dessen book but it was still good. Light and humorous. I just couldn't connect with the heroine unfortunately. But I absolutely loved Dexter and John Miller because these two are so adorable and quirky and hilarious. Truth Squad, Dexter's band, was the highlight of this book for me. Dexter's dog, Monkey, was also a hoot.


This Lullaby tells the story of Remy Starr who, after seeing her mother remarry multiple times and never meeting or knowing her father, is cynical about love. Most of her close friends also share this attitude and I found this depressing. I was glad that Remy's brother wasn't as opposed to love and was even in a happy relationship. He and Dexter (plus the Truth Squad guys) kind balanced out the girls' doubt at least. Remy and Dexter's first meeting was amusing. His lines made me grin so bad. How could you not come to love Dexter though?! He's an actual ray of sunshine.

"The fate of your heart is your choice and no one else gets a vote."

Remy's mother was a character that grew on me. I didn't pay much attention to her at first. It was almost like Remy was portraying her as weak because of all her failed marriages. There was a moment in the book where they have a heart-to-heart that it made me tear up like crazy. Sarah Dessen definitely has a knack of pulling my heart strings with touching family dynamics *wipes tear*.

Like my last Sarah Dessen read though, the heroine didn't capture my heart like the hero, or a few of the secondary characters, did. I wasn't the biggest fan of Remy. The only times that I did like her were when she was with Dexter/Truth Squad, go figure. Imagine how happy I was when Remy's look on love slowly changed. Remy was independent and headstrong, and I did come to admire her for those qualities. Luckily, Dexter is the kind of character that makes everything better. So I powered through for him and I'm glad I did! It was definitely nice to read the backstory of two characters that peaked my interested in Just Listen!