This feature was inspired by That's What He Said Thursday (hosted by Julie & Rose at Chapter Break)
and Swoon Worthy Saturday (hosted by Hazel at Stay Bookish).

Well, well, well, the time has arrived! It's revival day of one of my favorite blog features~ 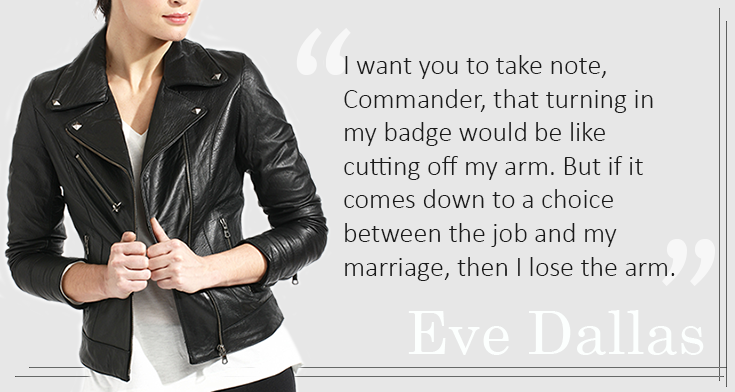 (Quote from Vengeance in Death by J.D. Robb)


Eve is the leading character of J.D. Robb's (aka Nora Roberts') In Death series:

♥ Definition of 'badass'
♥ Forever on the hunt for her elusive office-candy-thief
♥ Convenience > style
♥ Tough-as-nails but closet softie
♥ Willing to threaten others for information
♥ Public enemy one = vending machines
♥  Death's ace justice fighter
♥ Baffled by the rules of friendships (i.e. gifts, hosting parties)

This is my go-to series when I'm in a slump! It hits all the right buttons for me. I started the series back in 2012 and kept at it, binge reading from time to time. I've made it up to book 26. The series is on-going, with 50 books currently published. My advice is to take it slow but I found it easy to be sucked into the amazing futuristic world that these characters live in. Each novel focused on a different crime. As you progress through the series, more characters are introduced that stick around. You could say the In Death series has a phenomenal 'cast'. But warning that the crimes can be very violent and described with a lot of detail. Trigger warnings for abuse in all forms as well (i.e. physical, sexual). Not every book is 'dark' and difficult to stomach but I've grown to love the balance of crime and character plot. Secondary characters make for a lighter atmosphere which really helps with said balance as well. Plus there's romance and I'm a sucker for love.
Posted by Jae at 10:00 AM