Blog Tour + Giveaway: OVER HER WED BODY by Alexia Adams 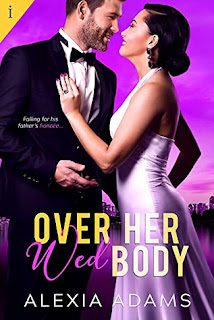 
Beckett Samuelson has had enough stepmothers to spot a gold digger when he sees one. So when his ailing father announces his engagement to the private nurse he's only known for two months—who's also forty years his junior—Beckett has to step in. But as he gets to know the woman, he realizes she's the perfect next Mrs. Samuelson.

If only he was the intended groom.

Corazon Dela Cruz sends every spare penny she earns to her family in the Philippines. Then her latest nursing client offers her $25,000 to fake an engagement to convince his overprotective son to return to work abroad—he doesn't need Beckett's help. But as Corazon and Beckett spend more time together—from picnics on the beach to galas in fancy dresses—she starts to develop very real feelings.

Too bad she's engaged to the wrong Samuelson.

"I think the filling is ready." She pulled a spoon out of the drawer, put  a mouthful of the mixture on it, then blew on it gently a couple of times before offering it to him. "You can be the chief tester."
He put his hands behind his back and leaned toward her. As she approached his lips with the spoon, their gazes locked again. The little voice in his head was screaming "run" so loud, he was surprised she didn't ask what the noise was. Her lips parted as his closed around the spoon, holding it  a moment longer than necessary. The intimacy of the moment throbbed between them, matching the throbbing elsewhere.
"It's good. Very, very good," he whispered.
"Oh, um, yes, great. That's good, then. Okay, I need a drink. I mean a glass of water." She pulled a glass from the cupboard, filled it from the faucet, and drank it in one go.
"You seem to know your way around the kitchen," he said when she finally turned back to him. Her skin was slightly flushed, her lips parted, and her breathing shallow and rapid. If he'd planned to discombobulate her, it was working.
"I've helped Edith prepare the meals since I arrived. What she cooked for Chester, before, well, it was hard for him to eat on his own with one hand. Your father's a man, not a child, he didn't want to be fed." She returned to the stove and lifted the heavy pot before he could offer to help.
He leaned against the counter. "You just fed me. I didn't mind."
"You're not your father," she said. Her gaze flickered up and down his body once before she seemed to recall why he was there. She grabbed a package of wraps, then showed him how to roll the pork mixture in the thin skeets of pastry. Her arm was across his body, her soft breast pressing against his bicep. He pushed his lower body further against the counter to hid his growing erection. As it was, it took every ounce of concentration to keep his hands from shaking.
"There, I think you've got it," she finally said, having guided his hands to successfully roll a half dozen of the spring rolls. She stepped away and the relief he expected was, instead, devoured by a sense of loss.
He'd got something all right. But it wasn't a knack for making Filipino spring rolls.

I don't know why but I absolutely LOVE scenes where characters cook together. Kind of a forced proximity moment surrounded by delicious aromas. The stomach is growling and the heart is pounding heheheh. I can feel the chemistry and attraction between Beckett and Cora. This book sounds like a winner!

A former world wanderer, Alexia Adams writes contemporary romance stories that reflect her love of exotic destinations and diverse characters and cultures. She currently lives near Vancouver, Canada with her husband and four children and dreams of a world without housework. As a flight risk mom, romance is her escape and she can often be found with her nose in a book, pretending he's somewhere else.

a Rafflecopter giveaway
Posted by Jae at 8:00 AM