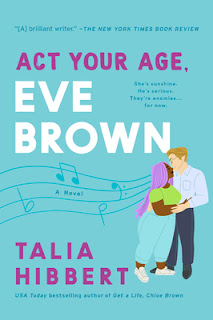 Act Your Age, Eve Brown
by Talia Hibbert
Release Date: March 9, 2021
| +Goodreads |
Series: The Brown Sisters #3
Genre: Adult, Contemporary, Romance
- - -
Eve Brown is a certified hot mess. No matter how hard she strives to do right, her life always goes horribly wrong—so she's given up trying. But when her personal brand of chaos ruins an expensive wedding (someone had to liberate those poor doves), her parents draw the line. It's time for Eve to grow up and prove herself—even though she's not entirely sure how...
Jacob Wayne is in control. The bed and breakfast owner's on a mission to dominate the hospitality industry—and he expects nothing less than perfection. So wen a purple-haired tornado of a woman turns up out of the blue to interview for his open chef position, he tells her the brutal truth: not a chance in hell. Then she hits him with her car—supposedly by accident. Yeah, right.
Now his arm is broken, his B&B is understaffed, and the dangerously unpredictable Eve is fluttering around, trying to help. Before long, she's infiltrated his work, his kitchen—and his spare bedroom. Jacob hates everything about it. Or rather, he should. Sunny, chaotic Eve is his natural-born nemesis, but the longer these two enemies spend in close quarters, the more their animosity turns into something else. Like Eve, the heat between them is impossible to ignore—and it's melting Jacob's frosty exterior.
- - -
Why? Is it possible to anticipate a book in a series you haven't even started yet? Well, yes. Yes, you can. This series has been so hyped up on my social media feeds. Between the cute covers and the cute synopses, I fell pretty quick into booklust. I have books one and two waiting patiently on my shelf. Once I get my hands on book three, you best bet I'll be binging through them. 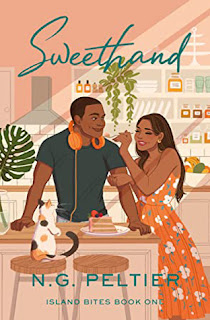 Sweethand
by N.G. Peltier
Release Date: March 30, 2021
| +Goodreads |
Series: Island Bites #1
Genre: Adult, Contemporary, Romance
- - -
After a public meltdown over her breakup from her cheating musician boyfriend, Cherisse swore off guys in the music industry, and dating in general for a while, preferring to focus on growing her pastry chef business.
When Cherisse's younger sister reveals she's getting married in a few months, Cherisse hopes that will distract her mother enough to quit harassing her about finding a guy, settling down and having kids. But her mother's matchmaking keeps intensifying.
Cherisse tries to humour her mother, hoping if she feigns interest in the eligible bachelors she keeps tossing her way, she'll be off the hook, but things don't quite go as planned. Turns out for the first time in ages, she and Keiran King, the most annoying man ever, are on the island at the same time. Avoiding him is impossible, especially when Keiran's close friend is the one marrying her sister, and he's the best man to her maid of honour.
Keiran doesn't know what to make of Cherisse now. They've always butted heads. To him she's always been a stuck-up brat who seeks attention, even while he secretly harbored a crush on her. Now with Cherisse's sister marrying one of his good friends he can't escape her as the wedding activities keep throwing them together.
When things turn heated after a rainy night of bedroom fun, they both have to figure out if they can survive the countdown to wedding day, without this turning into a recipe for disaster.
- - -

Why? I appear to be on a foodie main character kick. I'm getting that "it was always you" vibes and I'm loving how there's also enemies-to-lovers trope feels (even if it's only one-sided heheheh). HELLO. It's pushing all the right buttons for me! The cover is also b-e-a-utiful~
What are you waiting on?
I'd love to stop by and see your pick(s), just leave a link in the comments :)