Review: HOW TO KILL YOUR BOSS by Krissy Daniels 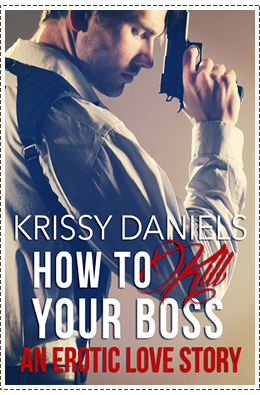 When Tatum's daydreams of murder become reality, all fingers point to her.

In Tatum Wood's opinion, murdering her boss on a daily basis within the safety of her thoughts is better than therapy. Until he takes a swan dive off a building and all evidence points to her. Thank goodness she has Franklin Reed. Her mysterious, overprotective and drop-dead gorgeous coworker is all too eager to play hero. With two attacks in her building and her stalker with a penchant for roses, Franklin's injection into her life couldn't have come at a better time.

As Tatum and Franklin scramble to discover who's behind the murder, secrets are unearthed that question his motives...as well as his identity.

“I protect what's mine. At any cost.”


How To Kill Your Boss was humorous, suspenseful and HOT! The heroine, Tatum, works at a PI investigations firm that was once owned by her father but eventually given to Wallace Cruse, the star of her fantasies. Not her sexual fantasies mind you, she dreams about killing him. When Mr. Cruse winds up dead, all evidence points to her.

The story was told solely in Tate's pov. I loved Tate! She had sass and a backbone. She often said whatever was on her mind without filter and she didn't take crap from anyone, not even our hero Franklin when he calls her 'baby'. I enjoyed reading the fantasy murder schemes, though I found them amusing at the beginning it started feeling redundant after the first four.

“I want you consumed, mind, body, and spirit with want for me, for us.”

Franklin Reed (isn't that an awesome name?) I liked him. He was the new guy at work that Tate got along with and instantly became friends. They had major chemistry. I had suspicions early on about who he really was, though there were times I actually thought he was the bad guy haha. He's incredibly protective of Tate, bordering on extreme even. Why he is the way he is though becomes clear as the novel progresses and my heart melted during that scene.

I thought the relationship developed a tad too quickly but it may have just felt that way because of the two month time leap after their first introduction. I wouldn't have mind the story being a little longer just so I could see how they started off and connected!

“You’ll never be alone. Even when you can’t see or touch me. I’ll be there, keeping you safe.”