Review: THE SEA OF TRANQUILITY by Katja Millay 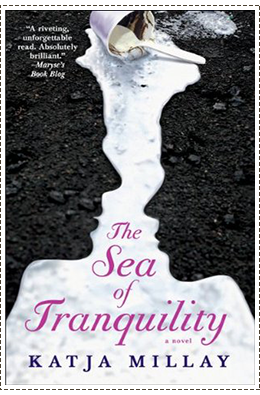 Title: The Sea of Tranquility

Former piano prodigy Nastya Kashnikov wants two things: to get through high school without anyone earning about her past and to make the boy who took everything from her—her identity, her spirit, her will to live—pay.

Josh Bennett's story is no secret: every person he loves has been taken from his life until, at seventeen years old, there is no one left. Now all he wants is to be left alone and people allow it because when your name is synonymous with death, everyone tends to give you your space.

Everyone except Nastya, the mysterious new girl at school who starts showing up and won't go away until she's insinuated herself into every aspect of his life. But the more he gets to know her, the more of an enigma she becomes. As their relationship intensifies and the unanswered questions begin to pile up, he starts to wonder if he will ever learn the secrets she's been hiding—or if he even wants to.

The Sea of Tranquility is a rich, intense, and brilliantly imagined story about a lonely boy, an emotionally fragile girl, and the miracle of second chances.

“I am pressed so hard against the earth by the weight of reality that some days I wonder how I am still able to lift my feet to walk.”

WOW. This book was B-E-A-UTIFUL. The Sea of Tranquility tells us the story of Nastya Kashnikov who, after a tragic event, leaves her family to move in with her aunt Margot. She wears a mask in the form of heavy make-up and revealing clothes to keep her past a secret. She eventually meets Josh Bennett who she notices IS avoided and left alone by the other students. I was intrigued from the very beginning by how mysterious both Nastya and Josh seemed to be.

I really liked Nastya. She had a sense of humor considering how her life got turned upside-down. What I found interesting about Nastya was that she had a hobbie of collecting names and finding their meanings. Nastya, rebirth and resurrection.

I loved Josh. He had a quite demeanor and was constantly woodworking or thinking about it. The only social interaction he really had was with Drew, his wonderful best friend, and Drew's family. I loved that he watches soap operas for his mother, drinks tea and takes the time to make a table or a bookcase just to give as gifts. I'm glad this book was told in dual POVs because it was through his narrating that I came to understand and fall for him. Josh, salvation.

I'll be honest. The very first time Nastya showed up at his house and just sat down to see what he was doing, I was confused at what she was doing. That's certainly how Josh felt. But when they started falling into a routine of doing woodwork in his garage, it felt normal. Two lonely souls finding comfort in each other's company. He was the only one Nastya would talk to.

“You are so pretty that one of these days I’m going to lose a finger in my garage because I can’t concentrate with you so close to me.”

There were a good number of wonderful secondary characters in this book (like Clay, what a sweetheart). But I like to think it was because of Drew that they became friends to start with and that Josh could admit his feelings for her. The build-up of Nastya and Josh's relationship was perfect, and the pacing was steady. Every moment in his garage made my heart get all warm and fuzzy.

When she reverted back to her old (but not old-old) self, I wanted to cry! I thought she was making such progress. But what was worse was what she was so close to doing at the party Drew took her to. It only got worse when they went to Josh's after it! MY HEART DURING THAT SCENE. OMG. I was really close to throwing my book. I was relieved that they didn't kiss and make up right away after that emotional tornado though. The separation made it more real.

And those last two words of the book... It was like the clouds parted and everything started making sense. It was fate, destiny, whatever you want to call it. They were just meant to be.

“Every day you save me.”

Drew Leighton
How can you not love this guy? He's such a wonderful friend, to both Josh and Nastya.
Three reasons why I adore him:
1. He has a big heart
2. He  always tries to ease any tension in a room
3. He's a mama's boy

The Chair
"He hasn't given me a place to sit. He's given me a place to belong."
When she checked underneath and saw the engraving (45%),
I squealed and clapped my hands with a huge grin on my face.
IMO, this was the turning point in their relationship.