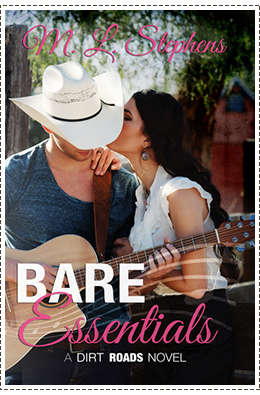 He's a cowboy with a guitar and an attitude. She's Nashville's toughest, most sought after music agent. They have one thing in common: country music.

Cutter Harrison relies on two things: beer and music—his music. At twenty-six, he's happily divorced and plans to keep it that way.

Holly Avery is on the hunt. She's determined to discover the next country music superstar and is willing to do whatever it takes to make that happen.

An unexpected meeting in Arkansas makes them question their pasts, their futures, and the bare essentials of love. Country music brought them together, but will their dirty little secrets keep them apart?

“There’s nothing wrong with pain. You need it so you know what does and doesn't matter. Without it, there’s no healing, no appreciation…no satisfaction.”

I have mixed feelings about Bare Essentials. On one hand I really liked the main characters, but on the other hand I couldn’t connect with their relationship. It felt rushed.


Bare Essentials tells the story of Cutter Harrison, Arkansas cowboy and talented singer/songwriter, who unexpectedly gets scouted by Holly Avery, top-dog music agent. Cutter was a mix of sexy and adorable. He was devoted in helping his parents run the Harrison farm even from a young age. He wrote songs about his ex Angie, whom he loved dearly but wouldn't take him back, and sung them for emotional release. Cutter was honest and wasn’t ashamed to shed a tear in the moment. Whenever he did though, I just wanted to hug him!

I loved Holly. She went after what she wanted with no restraint. A single mother, she was a spit-fire, intelligent and witty. Their attraction was instant and slowly, Cutter’s thoughts were plagued with Holly rather than Angie. Holly was determined to keep things professional though. Their banter during their very first meeting had me laughing. Here's a quote from that scene:

“Are you kidding? This is the best ass in Arkansas.” He clenched his glutes for effect.
“If that’s the case, the population of Arkansas must have dramatically dropped since the last census.”

But, like I mentioned earlier, I couldn’t connect with how their romantic relationship started in the first place. Mainly because in a span of a few days, Cutter was smitten with Holly and Holly didn’t really fight the attraction for someone wanting to stay professional. Whenever she did give in though, she'd give the cold shoulder the next day. I really wished that there were more scenes of them getting to know each other before the time jump into Cutter's music career. For me, bonding over the world’s best hamburger wasn’t enough reason for Cutter to start constantly thinking about her when he was heart-broken from Angie.

Besides that, the rest of the novel was wonderful. I loved that Cutter admitted to being afraid of losing who he was, his roots, once he becomes a Country star and how he was concerned with the welfare of his parents' farm. Gah, I love family loyalties, it makes me feel big time! On that note, I would have liked seeing Ray Ann, Holly's daughter, playing a greater role in the story. Overall, this book was good read, light and enjoyable. I do look forward to reading Jax’s story though. In the few scenes he had, he left an amusingly good impression.


“That’s how legends are created. You be one-hundred percent you and no one else.”