Review: THE PROMISE by Kristen Ashley 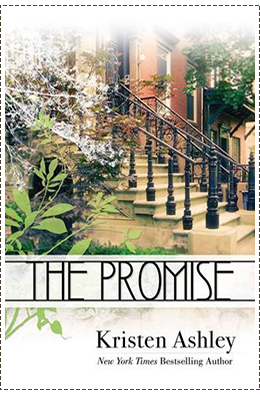 Since his brother's death, Benny Bianchi has been nursing his grudge against the woman he thinks led to his brother's downfall. He does this to bury the feelings he has for Francesca Concetti, his brother's girl. But when Frankie takes a bullet while on the run with Benny's cousin's woman, Benny has to face those feelings.

The problem is Frankie has decided she's paid her penance. Penance she didn't deserve to pay. She's done with Benny and the Bianchi family. She's starting a new life away from Chicago and her heartbreaking history.

But Frankie has more demons she's battling. Demons Benny wants to help her face. But life has landed so many hard knocks on Frankie she's terrified of believing in the promise of Benny Bianchi and the good life he's offering.

Frankie's new life leads her to The 'Burg, where Benny has ties, and she finds she not only hasn't succeeded in getting away, she doesn't want to.

"You were mine, even when you were his."

The Promise was one of my highly anticipated books after Frankie and Benny were first introduced in At Peace (book 2 of The ‘Burg series). Unfortunately, I wasn’t feeling it. Something about their relationship fell flat for me. I still enjoyed it though, especially with all the cameos!

In At Peace, Frankie was this incredibly bad-ass woman who didn't take shit from anyone. Then in The Promise it was like she lost that side of her completely. On the other hand, I liked Benny. He was protective and had Frankie's back when it came to her crappy family (excluding Cat, I liked her too). I felt the fixing of the breach with the Bianchis was simple and that they accepted Benny and Frankie's relationship too easily, I would've liked for those points to have been discussed some more. I LOVED ALL THE CAMEOS.

Cal
Hands down. Loved him in At Peace and I love him now.
He's such a lovable macho-man (one of my fav KA alphas ever)!
Whenever he gets protective of his girls, I just sigh and swoon.

Why I Love You
"I'd breathe. I'd eat. I might one day laugh again. But I wouldn't be living.
There is no life for me without you."
This made me fluttery everywhere.
This entire scene (85%) was so touching and sweet.

These books can be read as standalones but At Peace must be read before The Promise!
I say read them all though!!

Newer Post Home
Subscribe to: Post Comments (Atom)
“To build up a library is to create a life. It's never just a random collection of books.”
― Carlos María Domínguez