Review: ADDICTED AFTER ALL by Krista & Becca Ritchie 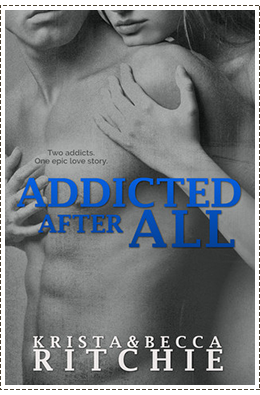 Title: Addicted After All

Prepare for the worst.

That's what Lily and Lo try to do when Jonathan Hale schedules an "important" meeting. The problem: after being swept into the public eye and battling their addictions, they're not sure what the worst is anymore.

In a sea of many changes--including Ryke and Daisy living with them--Lily realizes that the best part of her fluctuating hormones might just be the worst.

Her sex drive is out of control.

Loren knows that she's insatiable, but he's not giving up on her. She's too much a part of him. And as he carries more and more responsibility, some of the people that he loves doubt his resolve.

In the conclusion to their love story, Lily and Lo stand side-by-side to fight, one last time, for their happily ever after.
**Due to the 2-year gap between Addicted for Now (Addicted #2) and Addicted After All (Addicted #3), you must read Thrive (Addicte #2.5) and/or the Calloway Sisters spin-off series before reading Addicted After All.

"He is my soul. I am his. The moment we give up on each other is the moment that neither of us exists."


I can't even use love to describe what I feel for this series because what I feel is beyond it. This story and these characters become a part of you, making you feel every emotion with great intensity. Krista and Becca did a phenomenal job bringing these characters to life. They're real, imperfect and human. When they laugh, I laugh. When they feel pain, I cry. And when they're happy, I  jump up and down, shouting in glee to the world. The Addicted series will forever have a special place in my heart as one of my favorite series of all-time.

"A bad day can overturn into a better one. And all we have to do it be with each other."

Addicted After All wins my heart for giving Lily and Lo the happy ending of all  HEA. They struggled for this. And it was beyond perfect. LILO FOREVER!! Thank goodness we'll see them again in Fuel The Fire and Long Way Down though because I'm not ready to say goodbye for real just yet *silently cries*.

The tone of Addicted After All felt different from the previous installments of the series and because of that, I found Lily and Loren's growth most evident in this one. It always felt like Lily and Lo, as well as the other couples, were in their own world, isolated from reality. I don't think the previous books had this many secondary/other characters interacting with the main group. It felt like they were finally in the real world, a part of society and surrounded by people. A huge leap for Lily and Lo since isolating themselves to drown in their addictions back in Addicted To You. They've come a long way from the first book. Really, I just want to cry thinking about how far. Lily is still her awkward, adorable self that blushes tomato-red but she's not shying away from conversation, from people. And Lo, oh man Lo, his demeanor has taken a 180 degree turn for the better.

"I will wander with Loren Hale through every moment, good and bad."

The relationships in this series and most certainly in AAA, let me tell you, gold. The bromance between Lo and Connor/Ryke will always be my favorites. Then there's that between Lo and Rose, Lily and Ryke, Daisy and her sisters, even Ryke and Connor for goodness' sake. And that's just those within the main characters! There's also Jonathan and his sons, Greg and his daughters. ALL of these relationships just grew deeper and more significant. Those that were broken were mended. This series shows what true friendship entails. Their love for one another goes beyond blood ties. Whenever the words 'girlfriend', "fiancée", "wife", "husband" or 'best friend' were mentioned, I just wanted to dance and cheer.

This book crossed the barrier between character and reader. There were some surprising turn of events, both good and bad. The Truth or Dare game made me grin. The flashbacks made me melt. I went through my tissue box. When Connor spoke on behalf of everyone near the end of AAA, I bawled. If there was a bucket by my bed, it would've been filled with my tears. I can't even, you guys. Best and favorite scene EVER. Sorry I'm being so vague, but Addicted After All (and this entire series really) is a book I think you need to dive in head first without any ounce of knowledge. Just know, 'wow' and 'omg' were words I've repeatedly said while reading this book. And for you Raisy and Coballoway shippers, there's a lot of them too! My heart was incredibly satisfied.

Their characters aren't the only ones with superpowers—Krista and Becca Ritchie have proven themselves as a writing super-duo. Their writing continues to improve and impress. Their words painting the most vivid picture. It's like watching the story play out on screen. I cannot wait for the final books in the spin-off series. More Coballoway! More Raisy! MORE LILO!

If you have yet to read this series, drop whatever you are doing and give it a chance! I cannot recommend this series enough. Remarkable characters, both main and secondary. The Addicted series is full of friendship, bromance, sisterhood and love. There's also lots of silliness, cursing and sexy times. But if you're looking for a story with depth that will take you on one hell of an emotional journey, This. Series. Is. For. You.

The Addicted Series is split into 4 phases that connect together and span a continuous timeline.
The books don't have cliff hangers so you can start reading them right now!
You won't regret it.

Addicted To You
| Amazon | Barnes&Noble | Kobo |

Addicted After All
| Amazon | Barnes&Noble | Kobo |