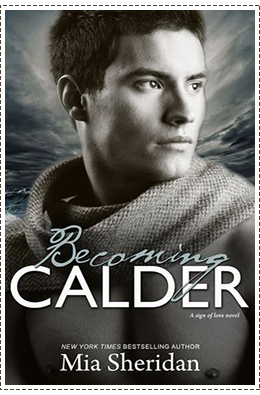 From the New York Times bestselling author of Archer's Voice. Becoming Calder is the first part in a two-part romance series. The conclusion, Finding Eden, is available now.

There is a place in modern day America with no electricity, no plumbing, and no modern conveniences. In this place, there is no room for dreams, no space for self-expression, and no tolerance for ambition.

In this place, there is a boy with the body of a god and the heart of a warrior. He is strong and faithful and serves his family honorably. But he dares to dream of more.

In this place, there is a girl with the face of an angel and a heart full of courage. To her family, she is the vision of obedient perfection. But she dares to want that which she has been told can never be hers.

Becoming Calder is the story of good versus evil, fear versus bravery, and the truth that the light of love has always found its way into even the darkest places...From the beginning of time, to the end of the world
**New Adult Contemporary Romance: Due to strong language and graphic sexual content, this book is not intended for readers under the age of 18.

"No one should ever stop you from gaining knowledge if you want it."


Becoming Calder is the kind of book that makes you think and appreciate life. Realize how fortunate you really are for having indoor plumbing, electricity, sweets, pencils, paper, freedom. This story was riveting, unique and enlightening. Although I felt the first 50% was slow for my liking, the last 50% was heart-pounding and epic! My heart hurt for both Calder and Eden, for having fallen for each other so intensely but not being able to express it to the world. You witness their growth from children to young adults and how their feelings grew as the story progressed. The burn was wonderful and their love was heart-wrenchingly real.

Calder Raynes is the water bearer in an isolated village called Acadia where everyone has a specific role assigned by the Gods. Even as a young boy, you can see how compassionate and strong he is. I loved all the scenes with his younger sister and those with his best friend, Xander. Both of whom were excellent secondary characters. Calder had always dreamed of being a part of the council, to be of more use to his people and to go out to work in the community.

Those that live in Acadia follow their leader, Hector Bias whom the Gods 'speak' to. Prophecy foretold that him, along with his future wife, would lead the people of Acadia to Elysium after a great flood. As I continued reading, I started realizing that Elysium was their Heaven and that Hector was essentially leading his own cult. He creeped me out to no end. His character seemed so calm and insightful but he could be incredibly ruthless as well.

"If this is the last piece of heaven I get before I'm dragged down to hell, then I'll gladly take it."

Eden was brought into Acadia when she was a young girl because she was needed to fulfill the prophecy. She was kept in the main lodge with Hector and the other council members but was basically isolated from everyone else. She had no friends. Her education was very limited. She was taught how to play the piano but that was it, no math, no science. The very first time she tries to interact with Calder and his friends was so heart-warming. The spark of the flame.

As they grow older and closer, I wanted to melt in a puddle of goo from their secret meetings and lessons at their spring. They're meant for each other. Though I was annoyed with how weak Eden was at the start, her character growth was phenomenal by the end. Both Calder and Eden are strong in different ways. They fought for their love. You experience so much hope and devastation in this book, it's crazy. I cried so hard in the last quarter of the novel. TISSUES ARE A MUST.

There was a scene with Calder and Xander concerning clothes and shopping in the second half ot the book that was so adorable yet so sad. Their friendship was actually my favorite aspect in Becoming Calder. They were like brothers, going to any length to help the other. But that ending! Oh-em-gee. I don't know how Mia Sheridan does it. Every book in her A Sign of Love series has been extraordinary and this one was no exception.

"As long as we're both under the same moon, we'll always find a way to each other."

A Sign of Love novels do not need to be read in order and can be read as stand-alones!
However, there are exceptions such as Becoming Calder and Finding Eden which must be read together.

Finding Eden
| Amazon | Barnes&Noble | Kobo |
Second part & conclusion of the Aquarius story. Should be read after Becoming Calder
Posted by Jae at 10:42 AM