Review: MADE by J.M. Darhower 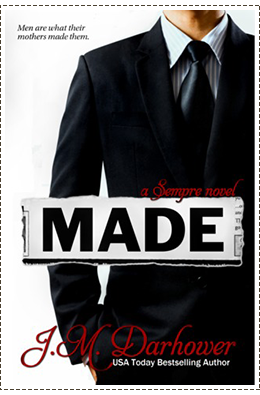 The world knows the notorious Kevlar Killer, but few have ever seen what lies beneath his armor. The abused child. The neglected teenager. The broken man. He always did whatever he had to do in order to survive.

It's kill or be killed.

Throughout his life, he has been there in the shadows, a witness to everything from beginning to end. Bound by loyalty and honor, there's only one thing he would sacrifice it all for: family.

Never get close. Never get attached. It's a lesson that has been brutally pounded into him since childhood, but they're words the DeMarcos make it difficult for him to follow. Through them he finds love and grieves loss, realizing the world isn't quite as black and white as it's made out to be.

"The circle of life, it's cruel, but it's unavoidable."

Wow. Corrado Moretti was a character that stood out in Sempre and intrigued me to no end. This book was phenomenal! Everything about Corrado's life is completely exposed and you can't help but feel for this honorable man. Made wasn't full of romance and cheesy love lines, which was understandable considering the kind of man Corrado is. This just made every scene between him and Celia that much more meaningful and touching.

"Only the weak use their fists. The strong use their words."

Made encompasses Corrado's childhood all the way to adulthood. His childhood was tough to read. His family acted like it was normal for someone to be beaten and even killed. Corrado's goal in life was to become 'an honorable man' like his father. You begin to realize quickly that he is one and an even better one than his father who, compared to his other family members, was relatively good. His mother was harsh and unstable. His sister was devious and ungrateful. His father wouldn't get 'Dad of the Year', always absent due to his work with La Costa Nostra, but he did teach Corrado some valuable lessons. Corrado learned early on how to be independent and how to emotionally detach himself from others. At least until he met Celia DeMarco, the daughter of La Costa Nostra's boss.

Celia is the light to Corrado's dark. She was fierce, protective of her younger brother, Vincent, and extremely curious. I absolutely LOVED seeing how they were as kids, as teens, EVERYTHING. I really enjoyed seeing how nervous Corrado would get around Celia heheh. He had a facade on while working but every time it was just him and Celia, it melted away and all you saw was heart. Corrado was incredibly compassionate, when he allowed himself to be that is. Surprisingly, he can be very amusing with his seriousness haa. But above all, I loved that he never treated Celia like she was 'his property' as some of the other men did and he never took her for granted. I also enjoyed seeing all the pieces come together for Sempre. And seeing young Carmine, Dominic and Haven... oh lord, my heart could hardly stand it. A MUST READ for those who loved Sempre!

"Because without villains, there wouldn't be superheroes."

Luna Rossa
"I found the one," he whispered into her hair.
"Favorite Sinatra song?"
"Yes," he replied. "But I meant you."
SWOOOOOOOOON.

So I read Made before reading Sempre: Redemption and noticed that there are some parts that I didn't recall in the first book.
I still enjoyed it nonetheless but here is the recommended reading order I've seen on GR.