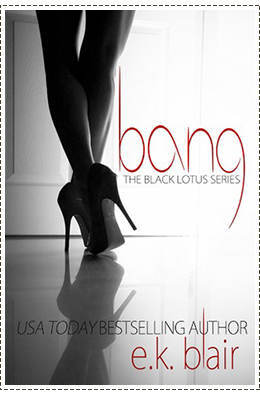 They say when you take revenge against another you lose a part of your innocence.
But I'm not innocent.
I haven't been for a very long time.
My innocence was stolen from me. Taken was the life I was suppose to have. The soul I was born with. The ruby heart embedded in a life full of hopes and dreams.

I never even had a choice.
I mourn that life. Mourn the what-ifs.
Until now.
I'm ready to take back that was always meant to be mine.

But every plan has a fatal flaw. Sometimes it's the heart.
**Due to the dark and explicit nature of this book, it is recommended for mature audiences only as some scenes may be particularly disturbing**

"Nothing is real until you break down the walls and reveal the ugliness."


Bang is told solely in the pov of Nina (aka Elizabeth) but there are three other key players in the book. Nina had a horrible childhood. I found the flashbacks to be the most disturbing aspect of the novel. I found myself literally cringing while reading them. As a result of her traumatic past, Nina has turned off her emotions in order to get revenge. She's deceiving and conniving but I sympathized with her. Nina is the wife of Bennett who loves her dearly. He's a sweetheart and I actually found I liked him more than Declan. Declan is the only one who could make Nina feel. I kind of thought his love was like an extreme case of infatuation. I couldn't tell if either of them truly loved the other.  Lastly, there's Pike who has known, loved and protected Nina since she was young. In a way, he's her accomplice. I liked Pike at the beginning but that quickly went downhill as the story progressed. All the characters in Bang were memorable. Even after finishing this book, I couldn't stop thinking about the story, the characters and what would happen next!

I thought plot development was perfectly paced. Each chapters was like a bread crumb and I found myself zooming through Bang, striving for the next chapter just to know how Nina's plan plays out. There were a number of WTF moments in this book, but there was one in particular that I have deemed as one of the biggest in my reading history. The scene was so good, then BAM What. The. Fuck. Just. Eww..? I had to read it twice to be sure I didn't read it wrong haha. Anyway, Bang was an intense and twisted rollercoaster. You may find yourself conflicted with who's side you're on (I certainly did). But I can guarantee that it's a book you won't be able to put down once you start! E.K. Blair hit this one out of the park.

"The heart is a weapon—a self-inflicting weapon—that
if not trained properly, can destroy a person."