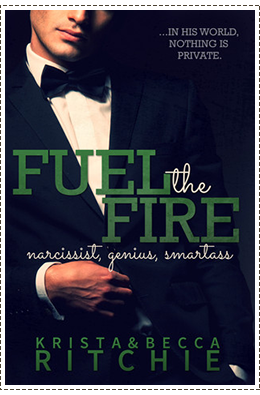 It'd take the impossible to hurt Connor Cobalt, even for a moment.

At twenty-six, his narcissistic tendencies have made room for the people he loves.

And he loves Rose. But when his love is threatened, when his greatest dreams with her are compromised—what is the cost then?

Protect your family. At all costs.
Love will guide his choices.
For the first time in his life.

"Love. It meant nothing to him. Now it's guiding his choices."

The Addicted series is my all-time favorite NA contemporary romance series and it continues to get better and better with each book. Fuel the Fire touched on real-life matters like mental illness, misogyny, sexuality, society's demand for labels. Throughout the series, there's an underlying theme of feminism and the media's portrayal of women. But in Fuel the Fire, the media plays a much greater role, as does the emotional damage it causes. This book also highlights the lengths a parent will go for their child, a person for their loved one. For every new Addicted novel review I write, I feel like I'm just repeating myself. But I can't stress it enough how emotional, how inspiring and how relevant I find this series to be. These are more than just romance novels. If I had to sum up Fuel the Fire in one word, it was extraordinary. To be honest though, even that word doesn't do it justice.

Fuel the Fire picks up where Addicted After All (the final book of Lily and Lo's story) ends and right from the first chapter, you have no clue what's going on. I didn't at least. Connor and Rose are incredibly intelligent, sharp and honest. They both exude confidence and are rarely unnerved. They're characters I have always thought of as invincible, perfect (regardless of a certain someone's arrogance haa). But they're only human and Fuel the Fire pushes you to accept this fact. This book had me misty-eyed to full out sobbing. To see Connor and Rose struggle to the point of questioning themselves and their future...IT HURT. And I'm not talking fall and scrape your knee kind of hurt. I'm talking multiple stab wounds to the heart [and I'm dead] hurt. In Kiss the Sky, I felt it was more lighthearted because of the reality tv aspect but in Fuel the Fire, the intensity was multiplied by 1000. Probably because we finally get a glimpse of their backstory (especially Connor's)—how they were before they met and how they were after. They make each other better. For two characters I thought had reached their full potential, their character growth was evident.

As with the Addicted series, there are still moments that warm your heart and make you laugh. The relationships in Fuel the Fire were also phenomenal. I'm beginning to realize that they really will just continue to grow deeper (how could I have possibly doubted it before *face palms*). I loved seeing moments between Connor and Ryke, Rose and Lo and every possible combination of the gang. All the best sister awards should go to Rose!! If there's one thing I took from Fuel the Fire, it's that you should never change who you are, who you're most comfortable and happy being, to appease other people. Don't change yourself because it's what norm dictates or society calls for. Do it for you. And thank the heavens for the people who love and support you because some obstacles are much more tolerable when you're not alone. I could not have imagined a better ending for these brilliant Nerd Stars and I am nowhere close to being emotionally prepared for Raisy's happy ending a.k.a. the end of the series. And I don't think I ever will.

"Strength comes in all different sizes and packages and molds."

The Addicted Series is split into 4 phases that connect together and span a continuous timeline.
The books don't have cliff hangers so you can start reading them right now.
The series can be quite intimidating with how long it is, but trust me, you won't regret it!